Futura is afford through churches.  Susan Craver and Marly Burton launched this program in 2017 within a church’s English as a Second Language (ESOL) program to help immigrants understand job search in the United States.  In 15 class sessions, students receive job search skills training: writing a resume, master application, reference sheet, cover letters, answers to standard interview questions, practice interviews, internet job search, and information about other resources in the community.  Information interviews are arranged with contacts in an appropriate field for each student. At the end of the program students have a comprehensive, personalized Job Search Methods Manual to serve them as they look for a job or a promotion.

The main contribution of the training is giving students a safe place to process their experiences and build new relationships.  Pillars of the program are:

The hope is that this program can help other church volunteers play an important part in efforts to welcome immigrants flooding into the United States.  For more information contact: Susan Craver Erickson – craversf@gmail.com     Marla Burton – marlaburton1996@gmail.com.  Website: futuraconnections.org, facebook.com/FuturaConnections 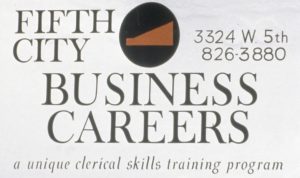 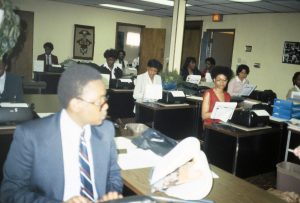 Fifth City Business Careers began in 1980, 15 years after the launch of the Fifty City Human Development Project. Shirley Mueller directed the program and Theo Mueller, Christina Harris, and Karen Snyder made up the team.  We felt confident about teaching all the curriculum (math/English, typing/calculator, job readiness) but were neophytes in using computers, not alone teaching others to use them. When we purchased two Apple computers, we were afraid to touch them for fear of breaking them. The entire team went to the computer store for a Word Processing training hour.  After watching and questioning the instructor, we were off and running for the next six years!

English as a Second Language

Joan Knutson used imaginal education in creating and teaching a language training program in Japan at the Bunka Institute of Language.