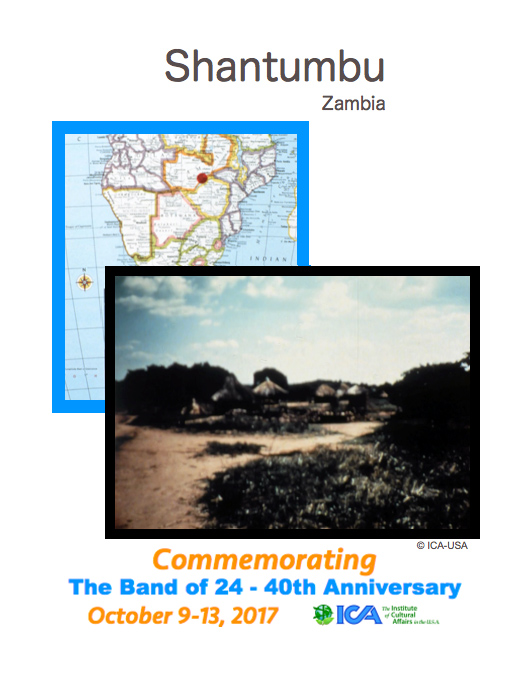 In the Shantumbu Human Development Consultation, the people of Shantumbu inititated a comprehensive development project for their cluster of nine villages in Central Province, Zambia. Linked to the capital city of Lusaka by a 16-kilometre gravel road, Shantumbu lies upon a series of low green ridges sprinkled with basalt out croppings, scrub trees, and small fields connected by red clay paths. The Shantumbu Human Development Project consists of Chisom pola, Shantumbu, Shiyala, Libubi, Chipwalu, Kambazuma, Kakote, Shibeleka, and Shikabeta villages, which understand themselves to be the Shantumbu area.

The project is a comprehensive effort that involves both the social and economic development of the village. It was begun by villagers and concerned citizens of Lusaka with the encouragement of government officials. Its intention is to expand the economic base through physical and industrial development, to centralize the community structure, and to equip the residents with practical, up-to-date skills. This project is seen as a demonstra tion of methods which can be adapted by any rural community in Zambia and which, therefore, can be duplicated elsewhere. Zambia, in the heart of the vast African continent of waterfalls, rivers, lakes, grasslands and wildlife, has been home to man for over a million years.

The modern era began in the late 18th century when Portuguese and Arab traders initiated traffic in ivory and slaves. Later, Afrikaaners and Europeans arrived to establish farms, develop the copper industry, and make Zambia a British protectorate called Northern Rhodesia. In 1964 Zambia won its independence and named itself after the Zambezi River. The years since have been a time of building toward economic freedom, with less dependence on the copper industry. Based on a philosophy of humanism, the nation honours common man by emphasising Zambianisation. educational re structuring, and self-help residential housing. Rural development as the key to the future is a national priority.

Globally, Zambia has charted a new course as a non-aligned nation and maintained stability despite upheavals in all of the eight countries surround ing it. In spite of economic reprisals it has supported all African freedom movements. With less than five million people sparsely scattered over approximately 700,000 square kilometres of fertile savannah plateau 96.5% uncultivated, agricultural experts are seen as a key to the future. The recently-completed Tanzania-Zambia railroad permits agricultural producus to be shipped to East Africa, Arabia, and India. Releasing the nation’s 100,000 farmers to grasp this opportunity is the task of rural development today.

The Shantumbu Human Development Project will develop methods and models toward accomplishing this task. The history and rapid growth of Lusaka, the nation’s capital, reflects the atmosphere of the new Africa. Situated in the middle of the long grass Longa plateau between the Lenje tribe to the north and the Soli tribe to the east, it drew its name from a Lenje headman and elephant hunter named Lusaka. It began as a small farming centre and then became a railroad centre because of its strategic location between the northern Copperbelt and Salisbury. In 1929 the British colonial capital was shifted to Lusaka from Livingstone, 230 kilometres south. This inaugurated a long period of town planning. Lusaka became a city planned by and for Europeans and other non-Africans, who created a “garden suburb” city where distance was no object since the Europeans had cars. Since Zambian Independence in 1964, Lusaka has taken a new direction. The city council, which had been entirely European in 1957, was soon entirely Zambian. For the first time the city could reflect the needs and aspirations of the “new majority” of the population.

Lusaka became a centre of activity. Many new government buildings, embassies, a National Assembly building, the new international air port and Zambia’s first university were constructed. There was a boom in new office buildings, factories and international hotels. The population since 1964 almost quintupled to 500,000, 10% of the entire population of Zambia. Opportunities for employment in government increased, and Lusaka became a manufacturing and commercial centre as well. Main roads were widened and tarred, water resources greatly expanded, new sewage treatment plants constructed, public transport extended and many other items of basic infrastructure associated with urban growth were established.

Presently, Lusaka is a demonstration of economic and social development for all of Zambia. The city is situated at the junction of rail routes north and south, and principal highways north, east, south and west. It is no wonder that this modern city of the new Africa houses the headquarters of many of the freedom movements for the majority of peoples throughout southern Africa. The village of Shantumbu, “Place of New Birth,” is made up of nine official villages. Nearly 1,500 residents live in unburnt brick and mud huts with thatch roofs and clay floors.

Although a few people work in Lusaka, most live by farming small plots of maize and vegetables near their huts for their own subsistence. Their tribe and language are of the Soli people, in the past a linguistic, cultural unit, who originally settled on the land now occupied by the city of Lusaka. Many old Soli traditions remain, including the role of village headman, who allocates land to each family and is the leader of his community.

A village council representing all nine villages to grasp meets from time to time to discuss common issues such as health, education and development. While the City of Lusaka has made great advances in these arenas, Shantumbu has experienced slower progress. Clusters of four or five families are spread across an expanse of largely uncultivated land. The recent national decision to turn to rural reconstruction finds Shantumbu’s small farmers struggling dale with oxen and hand hoe. The village people talk of mechanising their present farming methods and cultivating more land to upgrade a Lenje their family income.

The village leaders know that a new future it for the community will require a new way of living, but they do not s know how to journey the villagers into it. Shantumbu is located 30 minutes south of Lusaka along a little-known period dirt road on the southwest side of a forest reserve. On the west the project area is bounded by a large European-owned farm. The southern boundary is a sandy ridge and a small stream which flows linto an army training camp, the site of a new Lusaka airport. The stream is fed by perennial springs and four smaller streams which is are utilized to irrigate a few of the cultivated fields in the southern part of the village.

Due to the lack of a water system and the limitations of oxen ploughing, most of this six kilometres of land is an untapped natural resource. Several small cattle herds roam at will in the area. The two deep wells are supplemented by family wells, one metre or more in depth. City services are 16 kilometres away. There are no electrical, health or sanitation services in the villages. The roads are gravel or dirt which turn to a slick red mud during the November to April rainy season. Residents walk the 16 kilometres to Lusaka and back for needed consumer items. A number of families have bicycles; there are seven cars, and trucks. The freight transportation is a small railroad spur nearby where the agricultural board has a depot.

Education for the village is provided through a five-room, four-shift primary school all serving 492 students. The foundations for two additional school rooms have been laid but work has been held up due to a lack of village funds. The ten teachers, the headmaster and their families the live next to the school in concrete block houses. The daily life in the village occurs near the huts, ploughing the ground, cooking meals, and repairing the thatch roofs. The homes have a smeared mud floor and small windows. A wood or charcoal fire burns outside. It is subsistence living for most. The industries within and the villages are two maize grinders, village-brewed beer, a tinsmith and two furniture makers. The off-season work for farmers is making charcoal.