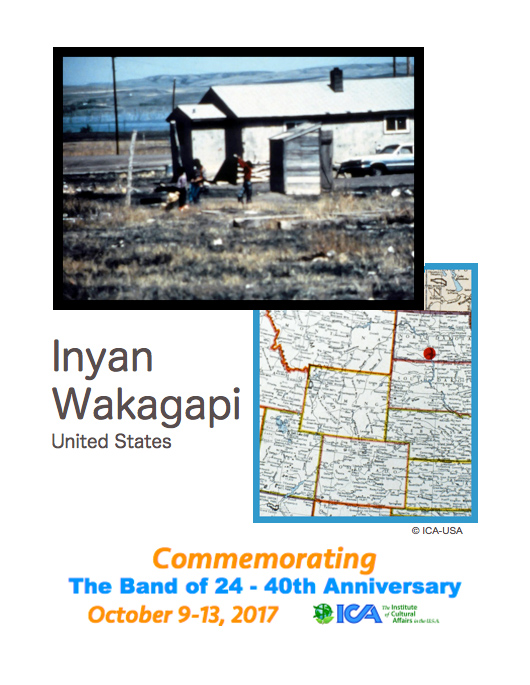 The Inyan Wakagapi Human Development Consultation was the initial step in a comprehensive development demonstration project. The Dakota name “Inyan Wakagapi” is derived from rock markings on hills near the village and means “Place of Sacred Markings.” The official name Cannon Ball is generally used by residents. The project in volves dealing with both social and economic problems in a comprehensive development program. It was begun through a cooperative effort of village and tribal leadership in conjunction with the Institute of Cultural Affairs.

Their intention is to establish structures and services now lacking, to develop a self-sufficient economic base and to involve the creative potential of the residents. The project is seen as a pilot program, the methods of which can be reduplicated on other reservations and in rural communities. The United States of America has always been known among govern ments for its dramatic experimentation with applied democracy. The development of the nation’s vast resources has taken place at considerable cost to both its native residents and newly arrived immigrants.

Throughout its history, however, it has been a unique combination of multi-cultural peoples aggressively seeking the betterment of life and the maintenance of basic freedoms. The United States is now entering a new period in its history. After a decade of civil turmoil and increased criticism abroad, the nation is experiencing a fundamental reevaluation of traditional structures. As the decade of the 70’s unfolds, recurring issues are gathering momentum: protection of the environment, honest government, fiscal responsibility, effective education and perhaps most critical, the role of the people in determining the future.

The emergence of political movements among Blacks, Chicanos, American Indians, women and elders has focused the nation on inventing a new, genuine9 participatory democracy. Those who are concerned with refocusing national vitality and purpose are increasingly aware of the struggle for responsible change at the local level and the power of citizens’ participation. In the midst of America’s Great Plains lies the Standing Rock Sioux Reservation. Sometime before 1640, French missionaries and traders knew of a strong people west of the Great Lakes whom they called the “Nadouessioux” and who called themselves “Dakota”. The name was altered in English translation to “Sioux”. During the late 1660’s those known as “Teton Sioux” were driven by the Chippewa and the French to the area around the upper Missouri.

By 1750 the Teton Sioux controlled all of the country between the Missouri River and the Black Hills and between the Little Missouri and the North Platte. Under the Treaty of 1868, the Sioux agreed to a reservation encompassed by the western slopes of the Black Hills, the Niobrara River on the south, the Missouri River on the east and the Cannon Ball River on the north. When gold was discovered shortly thereafter in the Black Hills, Northern Cheyenne and Arapaho joined the Sioux in resisting government reduction of the reservation. Despite determined resistance, the Teton Sioux were confined by 1889 to six reservations, one of which is Standing Rock. Since then, land has been frequently divided among the descendants of the Sioux and much of it sold or leased.

Today Standing Rock Reservation has a population of approximately 10,000, about half of whom are Indian. Diverse tribal memberships live here, but a sense of the Sioux Nation remains. The Reservation is governed by the Tribal Council. The Bureau of Indian Affairs exercises considerable influence in administration and decision making and many of these posts are filled by Indians. Bureau of Indian Affairs and Tribal offices are located in Fort Yates. Numerous federal programs and grants are available to Indian reservations and the Standing Rock Sioux Tribe.

The Tribal Council promotes and supervises a diversity of economic, social and cultural programs. There has been a significant upsurge in Congressional activity affecting Indians over the past ten years. These shifts, coupled with special jurisdictions by state and county governments and private service agencies, create great complexity in the services, laws and administration of the reservation. It has become obvious that funds alone cannot create the sense of social participation which existing programs intend.

The Reservation is made up of seven administrative districts. Cannon Ball district includes both Cannon Ball village and the small town of Solen. Its citizens are members of the Hunkpapa and Yanktonai branches of the Sioux tribe who were relocated here in the latter part of the 19th century. The name Cannon Ball dates l back to 1880 when the Post Office was officially named. This name refers to rock formations resembling cannon balls which are found in the Cannon Ball River. In 1964 some residents of Cannon Ball were forced to move when damming of the Missouri River formed the Oahe Reservoir.

A new location for the community was found above the river. This move is regarded as a significant turning point in its history. Natural resources such as cottonwood trees, fruit trees i and arable land were inundated by the reservoir. The new village site is characterized by intense prairie winds, minimal vegetation and highly alkaline water. The residential section consists of 90 houses, two-thirds of which are located in a central town cluster. During the winter months the temperature can drop to as low as -30°F.

In the summer, temperatures soar to 100°F and over. The dominant landmarks are twin buttes which lie to the northwest of the most densely populated residential section. Just-beyond the buttes is 6o~s the hill that gives the Inyan Wakagapi Human Development Project its ~e name. At the top of the hill are said to be markings, sacred to the ,n community. High unemployment, vandalism and alcohol abuse are con sidered by residents to be major problems. Yet an emerging mood th indicates that Cannon Ball residents are ready to take a fresh look a- at their future.

The project area is located in the extreme nor-theast corner of the Standing Rock Indian Reservation in Sioux County, North Dakota. The total area encompasses approximately 10,000 acres of mixed grass e and croplands within the tribal district of Cannon Ball (pop. approx. e 735). It is bounded on the north by the Cannon Ball River, on the west by North Dakota Highway 1806, on the east by the Missouri River and on the south by Beaver Holes Creek. The capital city of Bismarck lies 40 miles due north. The village of Cannon Ball, population 400 is situated midway between the towns of Fort Rice and Fort Yates.

The educational facility is Cannon Ball Elementary School which serves 87 children from kindergarten through sixth grade. Some .es village children board at schools in Fort Yates. Junior and senior high school students attend Solen High School and commute 26 miles rs each day. A total of 132 students from Cannon Ball are enrolled in public schools with an 80% average attendance rate. The median com pleted education level is grade 11.2. Public facilities include a deteriorated community center, three churches, an American Legion Hall, and one post office. A health clinic is serviced two days a ~ month by a registered nurse.

Two causes of death have increased dramatically over the past 20 years: cirrhosis of the liver has SLINK quadrupled, and the rate of suicide has more than doubled. There is one gas station open every day and a small confectionery located one mile south of town. There are no grocery or retail stores within the area. The maJority of the housing is government constructed, single family residences. The average purchase price is $5,000, average rental rate is $53 per month and 80% of the residents are in the ‘ process of buying homes. A number of log houses have been constructed free of charge by the tribe for the elderly. Nearly all homes have electricity, water and heating systems.

Community homes are supplied by a water tank located on a hill to the south. Outlying homes have either well water or transport water from the village in ~ milk cans. There are 23 listed telephones, of which five belong to I public facilities. The unemployment rate is 34%, rising drastically I during winter months. Employment opportunities are either govern ment-subsidized work programs such as the Tribal Work Experience Program or seasonal farm labor. The maJority of the area’s ranch operations are owned by non-Indians, leasing land from individuals or the tribal offices.