Three ongoing endeavors in North Carolina each draw on the work of both Thomas Berry and Joseph Mathews.  Emerging Ecology promotes a worldview for the next generations’ solutions through programs and research.  The Center for Ecozoic Studies prints and publishes work relevant to Thomas Berry.  A daily blog, the Journey Reflection, provides thought-provoking dialogues with notable quotes where the wisdom and insights of both Thomas and Joe figure prominently, along with other historical and contemporary persons.  Contact jpc2025@outlook.com for a free subscription to the blog which has made over 5,000 searchable postings since 2004.

Thomas Berry drew on extensive personal experiences and wide ranging studies to provide a comprehensive story of the Universe’s past and to portend an ecologically enhancing future.  The practical methods and perspectives of the Institute of Cultural Affairs (ICA) provide ways to implement the long-term visions set forth by Thomas Berry.  This ICA Global Archives Website provides detailed information to understand the ways that the ICA’s methods and spirit provide practical ways to give form to Thomas’ vision.

Thomas Berry moved back to Greensboro, North Carolina in 1995.  For the next 14 years, until his death in 2009, three people associated with the ICA had meetings with him at various times.  Thomas’ thinking and writing influenced each of their projects over the coming years.  The photo at the right was taken in 1996 in Greensboro, NC.  In the photo are (left to right:  Herman Greene, F. Nelson Stover, Thomas Berry and John P. Cock).

Thomas Berry and Joe Mathews had similar journeys through the 20th Century.  As Nelson Stover wrote in a paper called  “What I Learned”:

“Joe focused much of his energies on creating practical grassroots demonstrations of human development.  By inviting care-filled colleagues to live among the poorest of the poor, Joe helped create methods for both sustaining the spiritual well-being of teams of change agents and for ensuring the full participation of local citizens and technical experts.  From Joe, I learned how to foster fulfilling community among people of diverse perspectives.

Thomas focused much of his energies on creating the stories of cosmological transformation that undergird and give significance to the human condition.  By listening to the deep wisdom of traditional cultures and formulating a poetic narrative within a modern scientific context, Thomas helped people place the human endeavor within a context of an emerging universe.  From Thomas, I learned how to sustain change through evoking a story of the wonder of the Planet’s perpetual unfolding.” 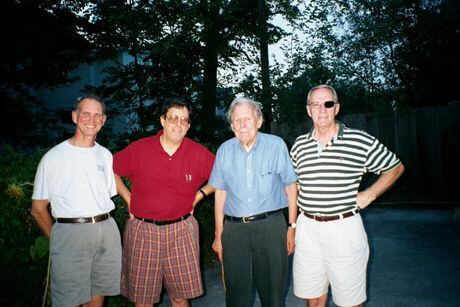 This portal has been prepared by F. Nelson Stover.  To suggest changes, additions or comments send him an email.