Often, when you bring people in to talk about human relations, they take a psychologistic approach: How can you best manipulate people in order to get the most out of your investment? When you live in a relatively stable moment of history, that may be all right; but when you live in a moment when civilization is exploding, then you have to drill much deeper if you are going to bring about human motivity. In the slums of West Chicago we would not have lasted five minutes with the psychologistic approach to human motivity. We had to dig underneath it.

One of the great things the crisis of the hour has done for us is to force us to re-think the theoretics of inclusive human relations; or, to use technical language, to re-think the sociological manifestation of the sociality of man. By the sociality of man, I mean that we have to live together. By the sociological manifestation, I mean the forms we create in which we can operate with some degree of effectiveness and efficiency together. What we have come up with in our day is dynamical sociality. In every social situation, in business or production, this new understanding is manifesting itself. No longer is society understood substantialistically. In the natural sciences of the world today, nobody ever saw, or will ever see an atom. The reality is the relationship, not the entity. Similarly in the social sciences, there is no substance called management, no substance called stockholders, no substance called labor. The reality in business is not the labor force, nor the capital force, nor the managerial force. The reality is the interrelationship of those. In society at large, we call this interrelationship the social process. We are discovering that these sociological manifestations of human sociality are dynamical. They are a complex dynamic, not composed of interrelationships or social substances or entities, but a matter of happenings—dynamics that are interrelated, interdependent upon one-another. For instance, the social process as a whole, is a dynamic comprised of three major dynamics.

The first is the Economic dynamic, the means in which society sustains itself in existence. Comprising the Economic process are the dynamics of Resources, of Production, and of Distribution. Underneath any analysis, whether you go to Marx or Smith, you are going to find these manifestations of humanness being death with. Through converting raw stuff into resources, converting those into usable goods, and then building a system whereby these goods are distributed, society maintains itself in existence.

The second major dynamic comprising the social process is the Political dynamic, not politics, but polity, or the organizing dynamic of society. The economic process cannot go on if there is not some kind of polity and organizing process in society in order that man is able to live and support himself.

There is a third major dimension in the dynamical social processes of any society, and I have put it at the top of the triangle. I call it the Cultural dynamic of society. By that I mean the dynamic where the basic images of a society are created and transmitted from one generation to another.

from Human Motivity and Reformulation of New Community – India 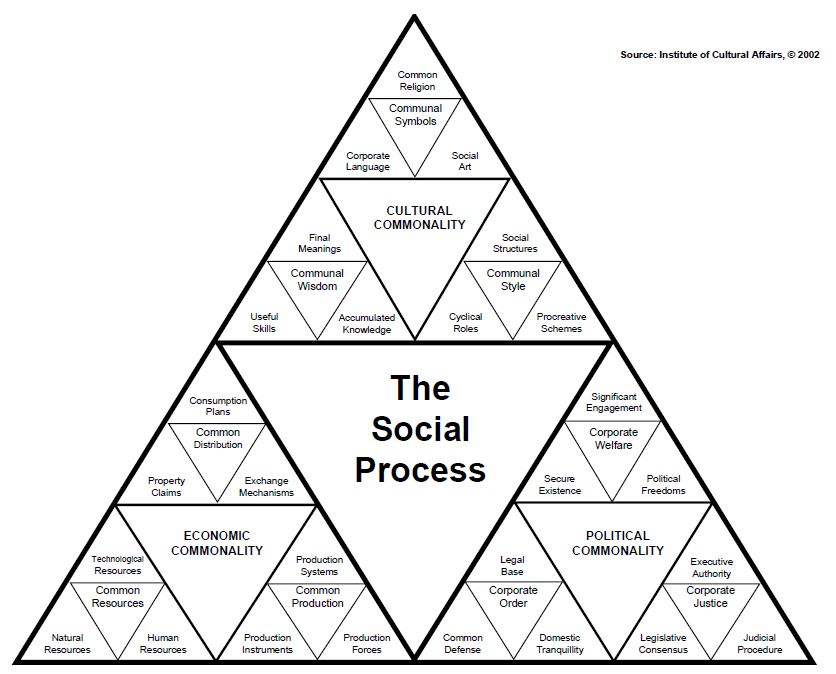 “Upon this gifted age, in its dark hour,
Rains from the sky a meteoric shower
Of facts . . . they lie unquestioned, uncombined
Wisdom enough to leech us of our ill
Is daily spun, but there exists no loom
To weave it into fabric.”

Dr. Clancy Mann used the Social Process triangles extensively in the graduate school classes he taught in global business.  His  “Introduction to Social Process Analysis.” explains their use as an analytic tool

The Institute used the Social Process Triangles a lot —

ADDITIONAL APPLICATIONS IN THE ARCHIVES . . .

Click here for more on the Social Process Triangles!

More explanation of the Social Process Triangles themselves

What is an “Interpretive Screen”?  link

How were the Social Process Triangles built?

Your assumptions are your windows on the world. Scrub them off every once in a while, or the light won’t come in