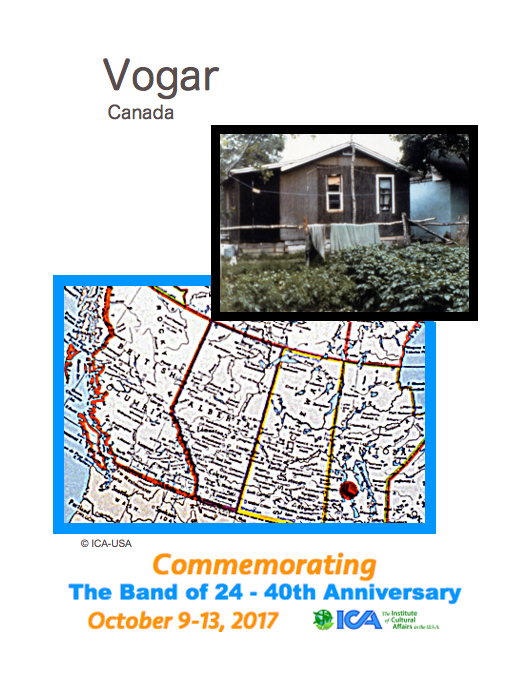 The Vogar Human Development Consultation was the initial step in a comprehensive development demonstration project in Canada. The Project began through a cooperative effort of village leadership in conjunction with the Institute of Cultural Affairs and deals with both social and economic problems in a comprehensive develop VHDP ment programme. The intention is to establish a commercial and industrial base by tapping existing village expertise and local natural resources, to provide viable social structures and services now lacking, and to enhance citizen involvement through training and engagement programmes.

The Project is seen as a pilot programme, the methods of which can be repeated in other communities. Canada is the second largest country in the world, occupying nearly four million square miles of the North American continent. Although Canada’s sparsely inhabited northern territories are opening up to settlement, most of the nation’s 22 million people live in a 300 mile wide ribbon along the 4000-mile southern boundary. The rugged land, the extremes of its climate and the different cultural back grounds of its people have fostered great diversity among its ten provinces and two northern territories.

Thousands of years ago T the Inuit and Indian peoples came across the Bering Strant and settled along the northern and western coasts and continental rivers. By the 10th Century, A.D. the east coast of Canada was knowil to European fishermen, but permanent settlements did not begin until the 17th-Century. For 200 years, Canada grew from its colonial French and English roots, maturing into a national confederation in 1867. By the mid-1880’s a transcontinental railway had linked the country from the Atlantic to Pacific Oceans, breaking open new settlement and encouraging growth and communication. Immigrants from all over the world found easy access to the rich agricultural lands of the prairies.

Canada has moulded this cultural and ethnic uniqueness into a rich and colourful national mosaic. French and English have been designated as the official languages of the country. Canada’s ten provinces and two territories function under the parliamentary system of government, within which exists a wide diversity of political expression and form. Recently, the original peoples, the many ethnic and cultural groups, each with its own language and cultural traditions, and the two main cultures , (the French-speaking and the English-speaking peoples) have intensified the creative tension between regional autonomy and national identity. Canadians are now actively discussing how to resolve the political differences in all sectors of the government and how to effect responsible change at the local level: in the fishing villages, in the farming communities, and in the urban neighbourhoods across the country.

The Interlake of Manitoba is the far~land and the forest north of Winnipeg between Lake Manitoba on the west and Lake Winnipeg on the east. It is land typical of the merging of southern prairie and northern forest which occurs across Manitoba, Saskatchewan and Alberta. In the 18th Century, men of the Hudson’s~Bay Company and other fur trading companies explored this area while expanding their trade with Cree, Assiniboine, Saulteaux and Ojibwa Indians. White traders frequently established families among the Indians with whom they traded. In the early 19th Century, the first permanent settlements in western Canada were established in the Interlake, and European contact with the Indian population intensified.

The Metis people, descendants of these European-Indian unions, played a critical role in the early development of western Canada, especially in the Interlake-Winnipeg area. The Metis were the enabling force behind most major surveying, trapping and policing expeditions mounted on the prairies. Strong educational backgrounds, obtained in eastern Canada and often Europe, enabled them to serve as negotiators and translators between European and Indian interests. They pioneered the development of trade between Minneapolis and Winnipeg, and invented the Red River cart, the primary mode of transportation for most early settlers.

The Interlake was the focus of the first Metis attempts to establish local self-government structures under Louis Riel in 1870. Metis unrest and discontent with the Canadian government finally came to a head in the unsuc cessful rebellion of 1885, after which Riel was executed for treason. After the Transcontinental Railway opened in 1885, bringing thousands – of new immigrants to the prairies, the buffalo herds which were the Metis primary resource rapidly dwindled, as did their land rights. In the midst of these and other factors, the Metis influence and spirit declined as well. Meanwhile, immigrants continued to pour into the Interlake.

In 1875, the largest Icelandic settlement outside Iceland was located at Gimli, and agriculture began ln earnest. In 1876, grain was exported from Manitoba to other parts of Canada and-the United States for the first time. Winnipeg grew from a small fur trading post to a major transportation and commer cial hub. Since the turn of the century, the Interlake has attracted numerous additional settlers, but development has been slow. The small farming, forestty and trapping skills which so aided early development are less useful today than they were in the past. Recreation, cattle-raising, manufacturing and new approaches to agriculture are but a few of the new directions to which the Interlake is turning its attention.

Like many other communities in the area, Vogar began in the 1890’s as Icelandic immigrants and Metis families moved north from estab lished communities and settled next to the Lake Manitoba Indian ~s, ~ Reserve. Originally, when the first post office was opened in 1905, the community was called Dog Creek. A small sawmill and store operated in the Dog Creek area in 1910, and a log church was con structed in 1918. Two more churches, two stores, an auto repair shop and a school were operated in successive years, all of which are now closed except the school. However, this decade has witnessed a surge of activity and the gradual improvement of community services.

A Vogar local of the Manitoba Metis Federation has done much to provide self-respect among community residents. In 1972, the existing school units were brought to Vogar and 1973, an outdoor skating rink was built adjacent to the school. In 1974, the first ~ | community well was drilled at the south end of the village. Seasonal !- | labour has largely replaced farming as a primary source of income, leaving most of the village only partially employed. A pilot project was jointly done in Vogar between 1972 and 1974 by the Department of Environmental Studies, the Faculty of Architecture of the y University of Manitoba and the Rural Development Division of the Manitoba Department of Agriculture.

A design for a community centre and new housing guidelines were proposed along with development of a wooden playground equipment industry. The proposal was partly enacted with the initiation of the playground equipment industry but marketing was unsuccessful. A current housing construction scheme is creating ten new homes for village families and providing some employment. ~s The village of Vogar is located 120 miles north of Winnipeg, Manitoba’ in section 33, Township 22, Range 9 west in the rural municipality of Siglunes. It lies near the eastern narrows of Lake Manitoba and on. is linked to neighbouring towns and Winnipeg by twenty miles of nds provincial highway 235 which joins main highway 6.

The community is easily mobile, as most residents have access to transport to get to work and to do shopping, laundry and obtain other services in the neighbouring towns of Eriksdale and Ashern, the latter being 25 miles away. Provincial bus service is twice daily with ready connections to all major transport systems. Just over two hundred people live permanently in Vogar with a number of part-time residents who work in other locations in the province. About 40% of the population is under 15 years of age. Of the labour force population, the majority are employed part of the year.

Unemployment insurance, welfare, subsidized ted legal aid, housing subsidies and full provincial health insurance are available. Most people in the village, however, earn under $2,000 income per year. Those employed mostly work as labourers, but there are also farmers, clerks and carpenters. Fresh water fishing, fish packing, Seneca root gathering, ice fishing, spring trapping, snake and frog collecting, cattle raising and game hunting are all sources of income. Some vegetable gardening and poultry raising are done for private use. Electricity is available to all homes in the village.

Telephone service is limited to a partyline system of ten phones and a pay phone at the local store. The primary sewage system is the traditional outhouse, although there are reported to be two indoor toilets. Since the drilling of the community well, residents no longer need to take their water from the lake and roadside ditches, garbage is taken by the family to the dump. Mail arrives three days a week at the single grocery store, where residents come to pick it up. Large-scale shopping is done in Ashern, 25 miles away. Health services are also available in Ashern. Alcoholism, malnutrition, and skin and respiratory-infections are the most commonly reported complaints. Police services are available through the Royal Canadian Mounted Police at Lundar, 40 miles away.

The community has a three-room school offering pre-school through eighth grade education. A new school is under construction which is due to be completed in December, 1977. Students above~eighth grade are bussed to Ashern. Higher education, especially vocational training, is available in Winnipeg. Schooling is conducted in English; some informal conversation is in Saulteaux or-Icelandic. The Siglunes Hall, three miles north of Vogar, offers bingo and sporting events, and a lakefront beach is available on an occasional basis. Winter ice fishing and fall hunting serve as both economic and recreational events. Both community churches are closed, but there are Roman Catholic and Protestant clergymen whose parishes include Vogar.