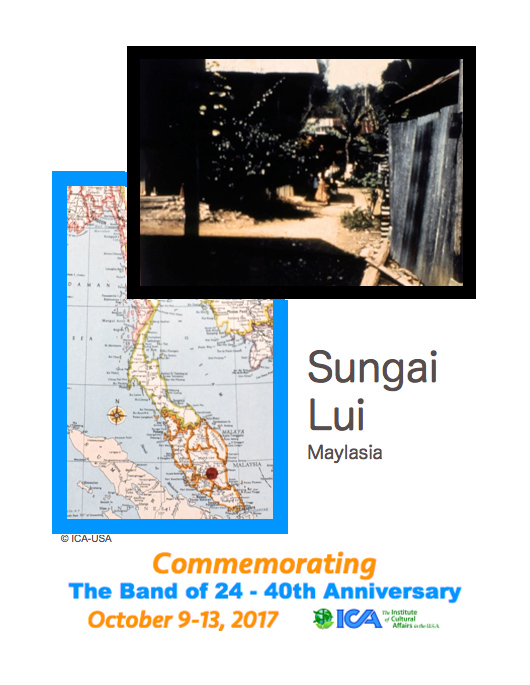 The Sungei Lui Human Development Consultation was the initiating step of a comprehensive demonstration project by the people of Sungai Lui. Sungai Lui is located 21 miles from Kuala Lumpur along a paved road, and is situated in a valley surrounded by high jungle-clad mountains and rubber small holdings. It has an abundance of fruit trees and is dotted with coconut palms. At the east end a waterfall roars down vertical rock slopes.

The Sungei Lui Human Development Project is a corporate effort involving both social and economic development. The project was begun by residents and concerned citizens of greater Kuala Lumpur with the knowledge and encouragement of public officials and business leaders. The consultation drew upon the current intentions of Sungai Lui people to strengthen their support base, revitalise village engagement and institute practical training. This project is seen as a demonstration of practical methods which are applicable to any rural community in Malaysia and, therefore, reduplicable elsewhere.

Malaysia is a multi-cultural nation of thirteen million at the crossroads of Southeast Asia. It is situated on both sides of the South China Sea in the southern Malay Peninsula and the northern third of Kalimantan (Borneo). Malaysia’s economy was built on its exports of rubber, tin, oil palm and hard wood~s. For centuries, the tropical climate, abundant rain and f~ertile soil have provided a strong agricultural base for village life. The nation is an Islamic state with large proportions of Chinese and Indians in the urban areas. In its external relationships, Malaysia is one of the five nations in ASEAN, the Association of Southeast Asian Nations,a group which fosters trade and co operation among its members in a similar fashion to the European Common Market.

Malaysia has shown a maturity and moderation in foreign affairs ever since becoming independent in 1957, which is a sign of credit to the leadership as well as to the people. In fact, in an area of the world embroiled in ideological tensions, Malaysia has achieved stability, national purpose and a growing prosperity. The focus of nation building, as articulated in the Third Five Year Plan, has been rural development, eradication of poverty, national unity and an equitable distribution of wealth within the free enterprise system. Government projects have extended services such as electricity, water, schools and roads to a large proportion of the rural sector.

Self-help projects (Gotong Royong) have.been encouraged as a way of local participa tion in national development. Utilisation of the tremendous – agricultural potential is being encouraged through improved methods of rubber-tapping, intercropping, marketing systems SUN( and co-operatives to ensure that all small-holders can have an adequate income. The Human Development Project now being initiated coincides with the aims of rural development as recommended in the Third Malaysia Plan. Inland from the west cost of the Malay Peninsula lies the capital city of Kuala Lumpur. The undulating hillside surrounding it has been periodically cleared of dense rain forest to cultivate rubber and oil palm. There are numerous Malay kampungs where people eke a subsistence living from padi cultivation and fishing.

The determining resource of Kuala Lumpur, however,has been the rich tin mine deposits located at the confluence of the Gombak and Kelang Rivers. Kuala Lumpur emerged as a settlement when the Chinese opened these mines in the latter part of the lSth century and used the settlement as the delivery point for bringing supplies to the miners. Rubber cultivation was introduced into the area somewhat later and large numbers of Indians came to work on the plantations and in the necessary auxiliary public works. This was the period of the heaviest European influence.

Through the centuries Kuala Lumpur has been influenced by many cultures and ethnic groups. The architecture reveals the lasting influence of Moorish, Chinese, British, Malay and modern international design, though the majority of the 800,000 people who live in Kuala Lumpur today are Malays, Chinese and Indians. The industrial development since World War II and particularly since Independence has made Kuala Lumpur a centre of expertise for the ASEAN nations and has brought about a startling change in the BA landscape of the city as high rises and superhighways appear throughout. Kuala Lumpur has increased its roles as industrial and commercial centre of the nation by being declared as a Federal Territory with administrative facilities separate from the State of Selangor.

Kuala Lumpur today is a thriving centre where business and commerce merge with the cultural admixture which make it an ideal location for tourists. In contrast to the cultural crossroads of Kuala Lumpur, Sungai Lui is representative of a typical Malay community. Families originally travelled from central Sumatra in the early part of the 20th century to settle on farmlands in the area. They brought with them their Kerinci dialect and the easy-going warmth of their culture, along with their strong Muslim faith.

Sungai Lui is named after one of many streams flowing through the valley: Sungai means river, and Lui is the name of an ancient aboriginal chief of the area. In the 1950’s national security made necessary relocation of many isolated houses into a more tightly clustered community known as Kampung Masjid on the paved road. Kampung Bahru, also in the Sungai Lui area, was moved in the early 1960’s so that a school compound could be built.

The people of the kampungs still tell how they moved their wooden houses on poles to the new location where the government had built a series of paved roads, At the entrance to the project area is Kampung Tanjong Pauh. Stretching from Sungai Lui into the surrounding hills are thousands of rubber trees planted 40 years ago, which – the residents tap regularly for a small monthly income. Men, women and children can be seen chopping the many varieties of bamboo to make products for outside markets.

Recently forty-seven families began to work together on a fish pond project in an aban ling doned tin mine. Agriculture is an integral part of the community rate and is stressed in the local primary school where top honours were won recently for their demonstration garden plot. But as a high percentage of younger residents are employed outside the rich village, attention has been drawn away from traditional farming [elang and many areas are left uncultivated.

Fuller utilisation of the land is one of the present challenges to wider economic growth and fuller development of the entire community of Sungai Lui. Sungai Lui extends from the nineteenth to twenty-third milestones from Kuala Lumpur on a secondary road from the main highway run ning through the Ulu Langat District. Bounded on the north and south by the Ulu Langat Forest Reserve, the project area is approx imately three miles by one and one-half miles. Its 232 households are sheltered in wooden houses clustered along the road which is paved to the eastern edge of the village.

Within this area the three kampungs: Tanjong Pauh, Kampung Masjid and Kampung Bahru, function under two headmen and one village council. These kampungs ·e have basic services such as a primary school for 174 children, a mosque, two community centres, eight provision stores and coffee the shops, a midwife clinic, and bus and taxi services to Kuala Lumpur. Electricity extends from Kuala Lumpur to fifty percent of the homes L I of Sungai Lui and both city and local water systems supply the ~ral village through a few strong-flowing public taps. The river water te is used for bathing and washing dishes and clothes. Telephone services and a shopping centre are located three miles away at the eighteenth mile settlement.

The average income of Sungai Lui households is Malaysian $210 a month. The residents are mainly small holders with three to four acres of land which provides i partial support to kampung families. At least 33% of the employ able adults work outside the village in varied occupations, some as teachers, military employees, and taxi drivers and many factory 1ght ~ workers. There is a preponderance of tapped and neglected rubber ·eir trees and some fruit trees in the valley, many going untended and taken over by undergrowth.

The people are industrious, rising early to cut bamboo, tap rubber, tend fruit trees and vegetables three waves of attendance: a small one in the early morning, another wave at two o’clock after the women returned from a morning of tapping rubber, and another large wave after seven o’clock when labourers, housewives and outside workers returned to the village. The villagers were reluctant to go home at night after the sessions had ended and groups of women stayed late, walking home in the dark with their flashlights.

Local town councilmen and elders escorted consultants through the kampungs and adjoining farmlands and to the waterfall where their homes had been before the relocation. One local shopkeeper compiled a list of one hundred women who were–eager to volunteer to begin the tailoring industry. The sign-up sheet for parents wanting their children to attend kindergarten was soon filled up. Eager to discuss their needs and open to suggested recommendations, the villagers began to see that change was imminent. One grateful villager said, “Once this village was showered with stones, now we are being showered with gold.”

The presence of consultants from near and far had a profound effect upon the villagers. “Why did you travel so far to come to our village?’, they asked a suc cessful, retired farmer from the USA. They were equally I surprised when a secondary school teacher volunteered to teach I drama to the youth and a timber supervisor volunteered to come |on weekends to train villagers in the use of carpentry tools. | Eight villagers from the Kelapa Dua Human Development Project | were key to releasing some of the fears regarding the practicality I of the programmes. They were paid a great tribute when a large crowd gathered to send them off at the final celebration and a local councilman came forward to say, “I am grateful from the heart!”

But the visitors and consultants in Sungai Lui not only injected fresh hope and new ideas, they were also visibly impacted I by the village and the villagers. The excitement for all reached a peak at the closing when residents and guests alike created verse after verse of a song to a popular folk tune, claiming promises for the future of Sungai Lui.

The task following the Consult is to initiate the implementation of the tactics which are focused in the Actuating Programmes reported in this document. First, this will involve the ongoing meeting of the local leaders, the Sungai Lui residents who I participated in the Consult and other interested people of the community to plan the programmes’ implementaries. Second, the initiation of special training sessions for local residents who will bear the responsibility for major aspects of the project will be needed, as well as the huildin~ of an inclusive community consensus concerning all aspects of the project. Third, project initiation will require continuing and expanding relations with the public sector.

It will also be necessary to develop support systems in the private arenas with the business community of Kuala Lumpur and with professional and business contacts beyond the city. Finally, project initiation requires that a catalytic staff reside in the community to begin training and building incentive that will raise a community-wide sign.