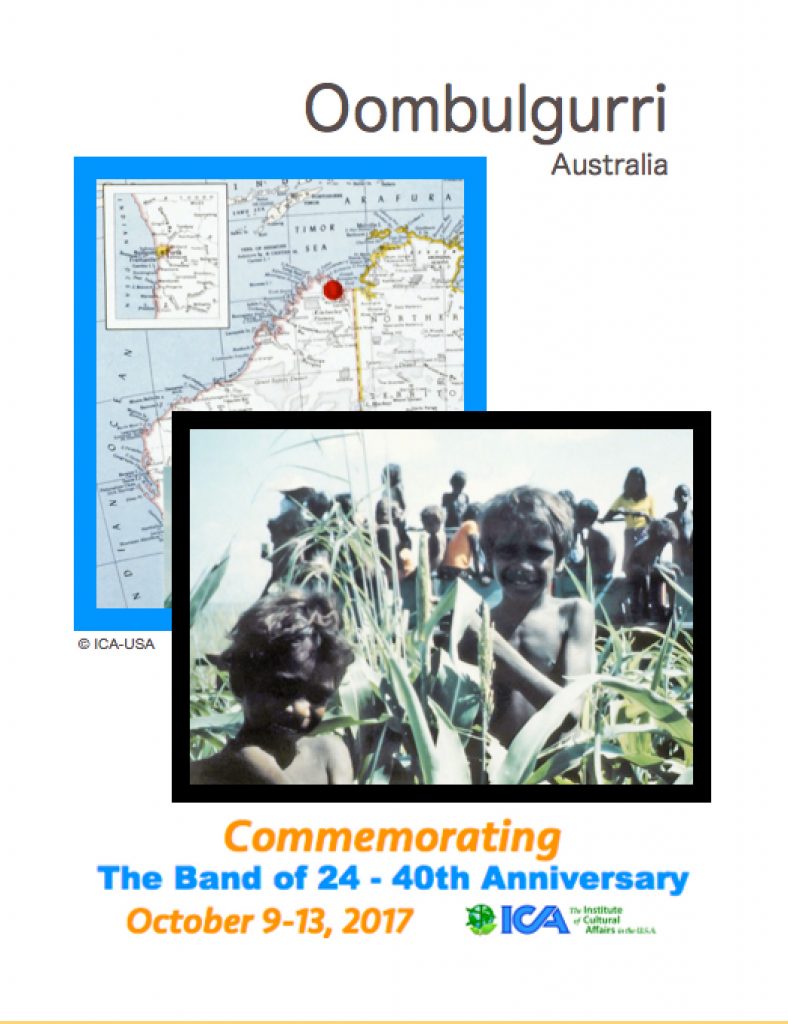 The Oombulqurri Human Development Project (OHDP) is a Community Development Programme of the Aboriginal people of north west Australia. It is a comprehensive effort that involves both the social development and the economic development of the Oombulqurri people. The local citizens conceived of the project, provided the substance for the planning of it, and are quite ready now to do the actuation of it themselves.

Their OHDP intent is to move their economy toward self-sufficiency, to transpose their ancient heritage into a social fabric relevant to the modern world, and to create the training structures that will enable them to participate effectively in that world. The O.H.D.P. is further seen both as a pilot project that can i be replicated in other Aboriginal communities and as a demonstra tion project that can be of service to the whole nation, and perhaps elsewhere in the world.

Two years ago fifty Aboriginal people decided to travel up the Forrest River north of Wyndham to resettle on their tribal land that had been abandoned in 1968. With an initial grant from the Department of Aboriginal Affairs and several staff members of the Institute of Cultural Affairs, they began the journey. Within six months they had made a second major decision: to create for themselves and other Aboriginals a new life within today’s world no matter what the cost. They have now grown to 200 with 100 children attending the local Aboriginal school. Most important is that the Aboriginals are now walking tall, seeing themselves through new eyes. They decided to go off direct welfare in 1974 because it was an assault to their dignity.

Recently a third major decision was made: to create a comprehensive plan for their future and to experiment in building a community development model that could be replicated among other tribal communities. This is the beginning of the Oombulqurri Human Development Project.

The Aboriginal people of Australia are at a critical crossroad of their history. After 40,000 years they are seeking new approaches to their problems within society. Socio-economic development is unavoidably required of them. With the growing realization that no community can exist today in isolation, the people of Oombulqurri have begun this task.

In order to build a comprehensive model and to accelerate their development, a decision was made to draw on the wisdom and resources of a wide variety of people. They decided to hold a consultation on the future of Oombulqurri with a group of business and profession al people in various arenas joining them in a week of practical planning for the social and economic development of their community.

An invitation was sent by the Oombulqurri.Council and community leaders to the Institute of Cultural Affairs t-o co-ordinate the consultation and provide systematic planning methods for its outcome. The Aboriginal leaders of Oombulqurri are expectant about building a secure base for their future and confidently anticipate the successful outcome of the project. The community has taken on a sense of stability and readied itself for a major step forward in its growth.

The project has already extended its influence. Recently a Wyndham Councillor stated in reference to the Oombulqurri experiment, “Two years ago people were leaving the town because of the unstable situation but are now saying that it is a good place to live.” This remarX pointed to Oombulqurri’s contribution to a new orderli ness in the area. Sir William McKell, previous Governor General of Australia, upon learning about O.H.D.P. stated, “It has the ingredients for building a new direction for Aboriginal communities across Australia.”

Because of the Aboriginal kinship lines, running west through the Kimberleys, south to Hall’s Creek and east to Darwin, the initial success of the project already relates to a much larger population. The possibility of replicating the project throughout the Kimberleys is most feasible. Indeed, the success of Oombulqurri could in time prompt the government to undertake similar projects with all Aboriginal communities who would desire such. Furthermore, the effort of this Australian community development experiment could give confidence to other countries which are also concerned with the developing people in their midst.