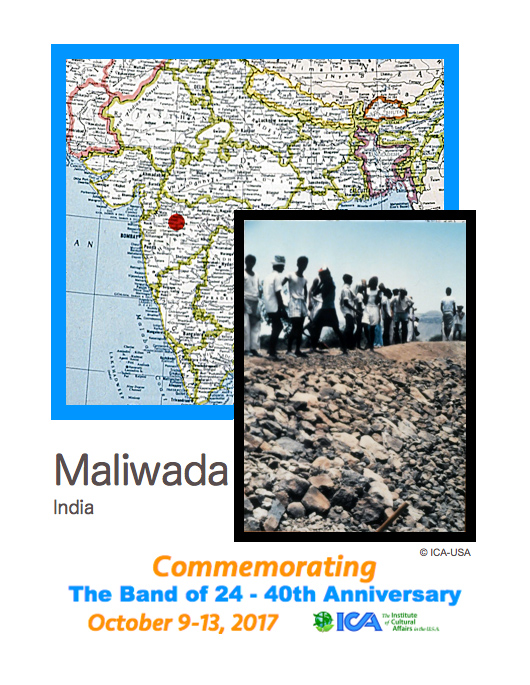 The Maliwada Human Development Consultation was the initiating step of a INDIA comprehensive development demonstration by the people of Maliwada, a rural village. Maliwada located fifteen kilometres northwest of Aurangabad in the State of Maharashtra, India Origin Maliwada is situated at the foot of Deogiri, the original name of Daulatabad Fort, the ancient citadel which commands the magnificent panorama of the whole Deccan Plateau.

The development project is a comprehensive effort that involves both the social and economic development of the village. It was conceived in collaboration with government officials and local citizens who provided the substance of the project design and are ready now to begin to act upon it. Their intention is to upgrade dramatically the economy on the local level; to develop needed facilities and essential services; to provide the practical training required for significant human engagement in the task of village development; and to transpose the wisdom and style of their ancient heritage into relevant contemporary forms.

This demonstration project was further seen as a pilot programme, the methods of which could be replicated in rural situations across the nation, and which therefore served the development of India as well as other nations of the world. After a quarter century of astonishing accomplishment in national industrial self-suff~ciency, the people of India stand at the threshold of a new phase in their history. Given momentum by the effort during the late sixties to intensify agricultural development and to alleviate the condition of the landless poor, there is taking place to day nothing less than a nation-wide village renewal movement.

Appropriately, this move re-affirms Mahatma Gandhi’s vision for there claiming of the rural villages across India, and is receiving wide support from both the public and private sectors. Those who are serious about the future are aware that the key to continued national development lies in the transformation of India’s villages. This promises to be the most effective way of easing the heavy migration of hungry rural people that presently burdens the metropolitan centres of the nation.

The first step in resolving the urban crisis, therefore, is to enable the new village effort to take effect. It is at this point that the Maliwada Human Development Project might be of signal value as a pilot effort in India’s New Village Movement.

Maliwada, whose name signifies “gardener’s village” is located approximately midway between the growing industrial city of Aurangabad and the ancient rock-hewn temple caves of Ellora. This position, as well as its proximity to Daulatabad Fort, places the village at a cross-roads where both local travellers and international tourists pass. The ruins near the village confirm the glory of the history of Maliwada. Over the succeeding centuries the complexion of Maliwada, like that of the neighbouring village of Abdi Mandi and Daulatabad, has changed.

In recent years the rise of the “Industrial Princess,” Aurangabad, has refocused the commercial activity that at one time centred around the citadel fort. During the past decade the severe droughts forced many residents of Maliwada to move away. Its population now is approximately 2000, most of whom farm their own varying-sized plots of land. Today in daily confronting ;the magnificence of the towering fort, the villagers remember the glory of the past and dream of rebuilding their land a second time. In such people is seen both the vitality of the early architects of the citadel and the deep concern of the rural Indian people for reshaping village life in a direction that could well create for other villages a symbol of possibility.

In 1977 a replication project behan in the state of Maharashtra eventually covering one village in each of its 250 talukas. Around some of these cluster projects also began such as the Malegaon Cluster near Pune today.

Maharashtra Replication in each of 232 Tulukas