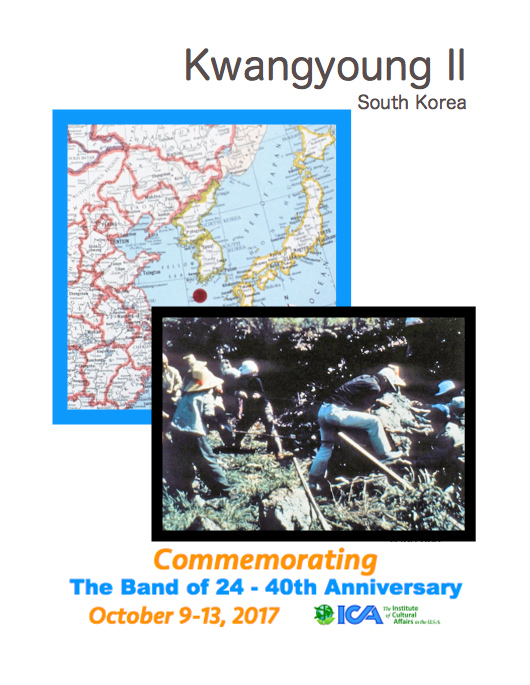 The Jeju-do Human Development Consultation is the initiating step of a comprehensive community development demonstration by the people of Jeju-do. This island, the southernmost province of the Republic of Korea, is located at the point where the Yellow Sea, the East China Sea and the Sea of Japan converge. The human development plan is comprehensive in that it involves both the social development and the economic development of the island’s people.

Government officials and local citizens of Jeju-do conceived of the program, provided the substance for the planning of it and are quite ready now to enter into its actualization. Their intent is to further modernize and up grade the economy on the local level, to further develop the technological services necessary for local man to effectively participate in the modern world, and to transpose the wisdom and style of the ancient heritage into presently relevant forms which will create and sustain the incentive for such participation.

This demonstration project is further seen as a pilot program, the methods of which can be replicated in other provinces of the Republic of Korea and can therefore be of service to the whole nation, and perhaps to communities in other nations as well. The people of the Republic of Korea are at the threshold of another great moment in their history of over 4,000 years. After two decades of miraculous economic development on the national level, the nation has turned its attention to nation wide social advancement through the socio-economic development of local communities. As a vehicle for this ambitious effort the Republic of Korea has developed the New Village Movement or the Saemaul Undong.

The expressed nature of the movement is threefold. first, it is a spiritual revolution concerned with developing attitudes of personal diligence, self-sustenance and corporate action, toward the voluntary participation of all the people in the furthering of the general well-being of every individual citizen, every local community and the nation as a whole. Second, and immediately related to the above, the Saemaul Undong is a social development movement which stresses, first, the refurbishing of the social fabric of all of the approximately 35,000 rural villages of the Republic and, then, of the local neighborhoods of the urban centers. Third, the Saemaul Movement is an economic development program aimed at raising the productivity of each local community in order to dramatically increase the per capita income and hence the material well-being of all the citizens of the Republic.

Any nation in the world would do well to emulate the initiative and dedication which have resulted in remarkable achievement in local economic development during the five years the Saemaul Movement has been working throughout the land. At the present moment, the Saemaul Movement is particularly ~ concerned about practical methods of profoundly motivating local people to sustain participation in the development of their local communities. It is precisely at this point that the Jeju-do demonstration can be of signal value. The 400,000 people of Jeju-do have participated in the ongoing social and economic development of the nation from the perspective afforded by the island’s particular heritage and unique gifts.

Although relatively isolated from the mainland, Jeju-do has been swept by powerful social currents from China, Mongolia, Japan and the West. Throughout these times, the people of Jeju-do have maintained the integrity of the Korean character and have developed their own unique stylistic traits and human qualities as well. This long history has left its scars, but Jeju-do has never forgotten the legend that, from its founding, this island is the location of the perfect human society. Most recently, the diligent and in dependent people of Jeju-do have joined with the government of the Republic of Korea in a coordinated development effort.

Today Jeju-do stands at the beginning of a massive tourism industry. Commercial services, vacation facilities and points of interest are being developed rapidly, and village beautification programs and local development efforts are underway all across the island. This is a perplexing moment in the history of JeJu-do and a challenging one as well. Along with the residents of Jeju-do, many people throughout the Republic of Korea, both private citizens and government officials, take an active interest in the development of the island.

All, especially the local people themselves, are aware that the socio-economic development of villages, towns, and cities of the province has become urgently crucial. In order to build comprehensive models toward accelerating Jeju-do’s development on the level of the local community, these concerned citizens decided to draw on the wisdom and resources of a wide variety of people. Hence, they set up a consultation on the future of local social units of Jeju-do which brought together a group of business and professional people from various outside arenas and local citizens for a week of practical planning.