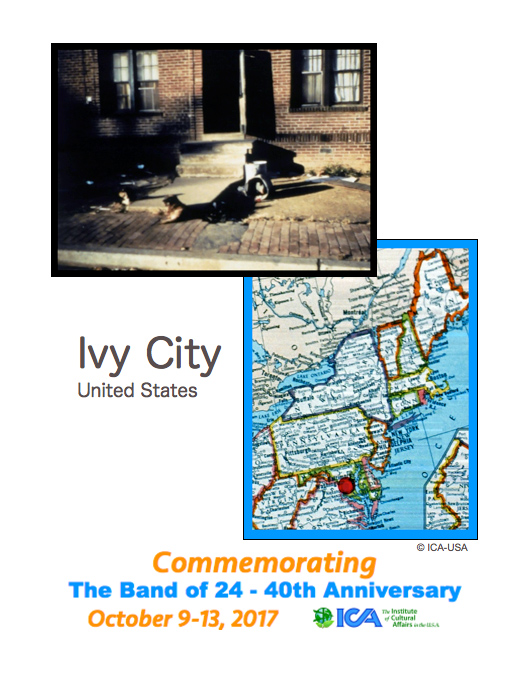 The Ivy City Human Development Consultation was the initiating step of a comprehensive community development project by the people of Ivy City, an eighteen block area located in the Northeast section ot Washington, District of Columbia, the capital district of the United States of Amerlca. Ivy City is located two miles northeast of the Capitol Hill complex in an area of mixed commercial and residential development.

The project is a comprehensive effort that includes both the social and economic development of the neighborhood. It was begun through a cooperative effort of neigh borhood residents and a group of concerned citizens of Washington, D.C.,with the knowledge and encouragement of various government officials. Their intention is to enhance the social environment of Ivy City, to fully utilize the basic resources of the community and to ensure neighborhood well-being. This project is designed as a demonstration of methods which can be used by any community in the nation, and which, therefore, could be duplicated anywhere.

The United States of America is entering a new period in its history. Relying upon its vast natural resources and the energetic creativity of its people, the United States rose during the past century to a position of global wealth, power and influence. Yet in the last fifteen years, a series of domestic and international events have tempered the heady optimism which had accompanied that dramatic technological development. Inflation and unemployment soared. Major cities across the nation erupted in violence and destruction. A new generation of youth disavowed their parents’ values and life styles. One President was assassinated, another forced to resign rather than be removed from office and a third inaugurated as the only non-elected President in the nation’s history.
Yet 1976, America’s Bicentennial year, has proved a time of reassessment of the country’s direction and the occasion of a resurgence of hope for the future among the American people. Several trends, apparent in the nation’s life, indicate this new mood. There are new commitments, by governmental agencies and local citizens alike, to protect the environment, to assure honest and open government, to eliminate all forms of discrimination in public life, to guarantee public safety in local communities and to create a new role as peaceful mediator among the nations of the wprld.

Those in public and private life who are most responsible for reawakening national vitality and purpose are stressing the need for citizen participation at the local level in order to implement these commitments to responsible social change. Public meetings and workshops, citizen committees and boards and other means of forging authentic- consensus on neighborhood issues and solutions are taking place in urban, suburban and rural communities alike. The American people have rediscovered the power of their heritage as a nation whose government intends to be “of the people. by the people, for the people.”

Washington,D.C., lies fifty miles east of the Blue Ridge Mountains and thirty-five miles west of Chesapeake Bay. The city, bounded by the Maryland Counties of Montgomery and Prince Georges and the Potomac River is both the seat of the government and a home for civil employees. It was planned by Major Pierre Charles L’Enfant, whose designs were modified by Andrew Ellicott and Benjamin Banneker. This careful planning has been a hallmark of its orderly development to its present position as the eleventh largest city in the country. Especially in its current bicentennial decor, Washington is strikingly the Capital City–an elegant frame of stately monuments and majestic thoroughfares for the machinery of government.

Washington has experienced the same social facts as every other city during the past years–a drain of population to the suburbs, decreases in its work force and tax base and heightened rates of violent crime and unem ployment. It has, however, found itself repeatedly used as a testing ground for congressional urban improvement schemes and experimental development methods and programs. For its large international popula tion it is a showpiece of what American cities are like. Washington residents are currently celebrating the end of their first year of elected local government under the leadership of Mayor Walter E. Washington.

This is a new era for Washington’s populace, a chance to participate first hand in the future of their communities. It is a time for social demonstration. Ivy City is one of the historic neighborhoods of Washington, D.C. When Mrs. Mary Fenwick had her land surveyed for a housing development in 1873, Ivy City was a plot of countryside pasture and farm land along the Baltimore and Ohio Railroad. The area became a brick manufacturing center and contributed to Washington’s construction boom of the 1880’s. By the turn of the century, Ivy City was the site of a widely known racetrack. Washingtonians took the train to what was then the country to see the races. At about the same time, residential growth became rapid and industries sprang up. Despite the gradual entrance of large commercial and manufacturing establishments over the years, the community remained closed, stable and permanent.

Even when urban Washington expanded to encompass Ivy City, the community retained its name and its identity. Commerce shifted away from Ivy City between 1950 and 1970, expanding out to suburban locations, and – ever since, the community has been increasingly used for warehouses, wholesale outlets, public utilities, vehicle storage areas and junk onsi- – yards. Over half of the community space is now given over to these ees uses. As more transient population moved into the community, renting rather than owning their flats and homes, traditional close neighbor nd hood ties loosened. The old solidarity reawakened when citizens e prevented a scheduled highway from running through the community. Community meetings held since June of this year have indicated a deep enthusiasm to move as one community again, to-rebuild Ivy City.

The eighteen blocks which compose Ivy City form a wedge, the boundaries of which are New York Avenue, West Virginia Avenue and the grounds of Gallaudet College. Across New York Avenue is an expanse vil of railroad yards. Mount Olivet Cemetery and an industrial area line the opposite side of West Virginia Avenue. Large warehouses, bus garages and public buildings in Ivy City itself, present an its almost unbroken front to the thousands of commuters who daily travel on the major boundary arteries. Ivy City’s 1800 residents have an average of just over ten years of formal education. Children attend ic Webb Elementary, Hamilton Junior High and McKinley High Schools, all within walking distance of the neighborhood.

The Crummel School, an imposing brick structure in the center of the community, has been an Ivy City landmark since it was built in 1912. It has been closed for several years, but it could provide community meeting space and a playground area for the children. About 16% of the young adults of the community neither go to school nor work and recreation programs are not available locally for any age group. The closest health facility is located on H Street, three-quarters of a mile away. Providence Hospital and Rogers Memorial Hospital are within two miles of the community. Several gas stations, two grocery stores, a credit to union, a barber shop, a dry cleaners and two cafes offer consumer services to the community. Two Metro bus lines link the neighborhood to downtown Washington. A branch of the new subway system will connect Ivy City to Washington National Airport.