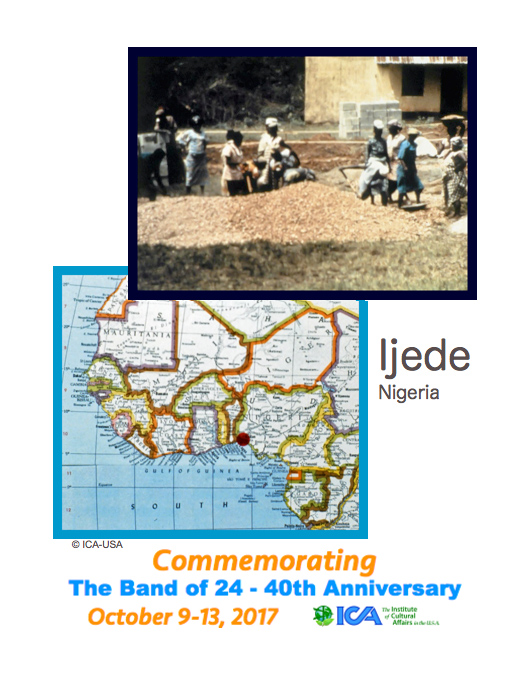 The Ijede Human Development Consultation is the initial step of a comprehensive demonstration development project by the people of Ijede Town, located sixty kilometers northeast of Lagos, the capital of Nigeria. Situated at the end of a newly tarred road, and built on a low-lying laterite clay shelf, Ijede overlooks the Lagos Lagoon. The word “Ijede” means “the place where men gather fish to eat”.

The Ijede Human Development Project is a corporate IHDP effort involving both social and economic development. The pro ject was begun by residents and concerned citizens of Lagos with the encouragement of government officials and religious leaders. The consultation drew together the current intentions of the Ijede people, focused in three fundamental arenas: accelerating economic expansion, promoting physical services, and encouraging social self-reliance.

This project is seen as a demonstration of methods which can be adapted in any rural community of Nigeria and,therefore, be duplicated elsewhere. Nigeria is “Africa’s Giant” not only in its population (about eighty million) but also in its tremendous economic potential. As recent chairman of OPEC (Organization of Petroleum Exporting Coun tries), Nigeria plays a significant role in oil production, and con – sequently in world leadership. During January 1977, the nation dramamtized its authentic African spirit by hosting the second World Black African Festival of Arts and Culture (FESTAC ’77).

Through twelve universities and colleges, Nigeria has developed educated leaders for Africa In the sixteen years since independence, the Yoruba, Ibo, Hausa and the many other peoples have overcome many obstacles in their struggle toward “Unity and Faith, Peace and Prosperity”. During the past few years it has been necessary to implement national development planning through military rule. In January 1977, state councils of nineteen newly formed state govern ments began local administration through both elected and tradi tional leaders. The states have responsibility for comprehensive community development.

Current federal objectives include food pro duction and supply, new rural industries, housing construction, man ufactured goods, decongesticn and assurance of essential commodities. The majority of Nigeria’s people live in rural villages. Self-help development is being encouraged by a campaign to “feed the nation” and by decentralising industry. Making these villages economically productive and their living conditions more desirable can help stem the tide of urban congestion.

The Ijede Human Development Project will spread self-help methods of community effort which go beyond the familiar individual and family approaches. Lagos, gateway to the Republic of Nigeria, is the capital of the Federation of Nigeria. The melting pot of many diverse cultures, traditions and civilizations, Lagos is a port, seat of~government, centre of diplomatic activity and fountainhead of the commercial life of the country. Lagos Island was settled by a Yoruba tribes man named Olofin, and became the seat of government both for King Gabaro in 1669 and for the British in the nineteenth century. In 1914, Lagos became by proclamation the capital of Nigeria.

The twenty-seven square mile metropolis which includes the islands of Lagos, Victoria and Ikoyi and adjacent areas of Ebute Metta, Yaba, Surulere and Apapa, lies between the Atlantic Ocean and the Lagos Lagoon. The city is undergoing massive growth. Oil production has brought expansion that has stretched municipal resources to the limit. Recently, driving restrictions have been imposed to allev iate traffic congestion. Since commercial and industrial develop ment have been forced so intensely on this area, the nation is pre paring to build a new political capital in the geographic centre of the country. But Lagos is also a global cultural centre, hosting the second World Black and African Festival of Arts and Culture with 15,000 participants attending from 54 nations and communities all over the world.

A Human Development Project close to such an im portant centre of development can esaily relate itself to the aspir ations of all of Black Africa. Ijede is the capital of a small kingdom with a population of about seven thousand located in the Ikorodu Division of Lagos State. Ijede derives its name from Ajede, the Yoruba chief who first set tled this area some 250 years ago. Thirty villages and compounds, the largest of which is IJede Town, are scattered across the forty three square mile landscape. The villages along the coast of the Lagos Lagoon depend mostly on fishing. The inland villages grow cocoa, maize, coconuts, palm oil, cassava, vegetables and spices.

The area also has a tradition of iron-working and construction. The residents of Ijede Town are traditional fishermen who are now being drawn into modern vocations and the urban life of Lagos. Ijede is L a town of colourfully dressed,proud gregarious people who welcome visitors with festive songs and dances. The farming and fishing of the area is done mostly for local consumption, while timber and cocoa are the major sources of outside income. Recently, Ijede re-established the traditional role of the ruling Oba who is final decision-maker for the community along with five ruling families and nine chiefs.