Six weeks of movement training was conducted and a basic curriculum was created. The key was designing the Imaginal Education approach and curriculum—drawing on Kenneth Boulding’s understanding of images:

1. Everyone operates out of images.

3. Images are created by messages that can be designed and communicated.

The UR Course on how primal images and depth experiences inform what it means to be a human being, was taught for the first time. There were six basic UR images of humanness: black, tan, brown, red, white, and yellow. The name UR came from mythology surrounding the ancient Sumerian city of Ur, now in modern Iraq, known for its antiquity and cultural diversity.

The first Fifth City festivals and UR festivals were held in the community each Saturday night of Summer ’67 (Doris Hahn, 2013).

Published the fourth issue of IMAGE, which included “The 5th City Reformulation Project” and the Five Operating Presuppositions (See » page 28). 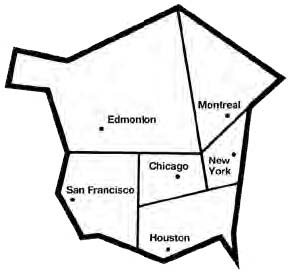 Council II of the Order Ecumenical

The Declaration of the Spirit Movement and

the People of G.O.D. Triangles.

Consensed on the North American Grid.

The Student House experiment was initiated with twelve high school youth. The first nineteen order youth were sent to live and study abroad.

The first Student House with college students began in the fall.

Beginnings of the Global Guardians

It all started with a women’s program on the West Side, targeting suburban women who might be Development contacts….called “The Trilogy”…. Anne Wood, Betty Pesek, and Priscilla Wilson….all of whom had had RS-I and maybe other seminars….were part of the team [and] were hosts with the EI for that event. This was in the late winter of 1967. That is how the involvement of these women, plus a bunch more… happened…. On to our husbands…and as they say….

See The Journey of the New Women from Priscilla Wilson, March 2015.

Martin Luther King was assassinated and the neighborhood was badly damaged. By the way, the “riots” occurred Friday and Saturday, April 5 and 6, 1968. Dr. King was shot on Thursday evening about 6:30 p.m. RS-Is were interrupted Friday evening just after the meal time ( Jim Troxel, 1992).

The second trek through Asia was in the spring, 1968. Don and Claudia Cramer and Donna and David McCleskey taught RS-I courses in local churches (Basil Sharp, 1992).

The first trip to the Middle East and research was conducted on the Historical Church and the Tan Ur.

The first trip to South East Asia where research was conducted on the Chinese Ur. Over 2,000 people went through courses on these trips (Bill Grow, 1993).

A trip to better understand the complexities of possible work in Australia with JWM culminates in OTFORD Council which birthed the EI/Spirit Movement in Australia (Brian Stanfield, 1992).

Latin America trip. The first trip was actually in 1967; my memory is that the Slickers and Marshalls were on the team. It was basically research and relationship building. The second trip was a teaching/consultation trip in spring ’68. The team was Gene Marshall, Kay Hayes, Jim Campbell, Ellen and James Addington. We did seminars in Mexico, Honduras, Panama, Colombia, Venezuela, Peru, Chile, Argentina, Uruguay and Brazil. This included a oneday consultation with the Chilean Catholic bishops just prior to the Medellin Bishops’ gathering that popularized Liberation theology in Latin America (Email, James Addington, 2017).