“Assembly participants met in three places: two were in Fifth City at the old campus seminary and the Program House on Fifth Avenue. The third was in what was called the “South House”—or the Chicago Region/ Metro House—located on Blue Island in the Pilsen neighborhood. That was the one I was in” ( Jim Troxel, July 2014). 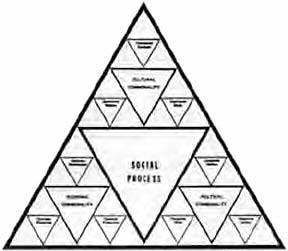 The New Social Vehicle research (NSV) resulted in the Social Process Triangles that describe the dynamics of sociality, along with The 77 Proposals for the New Social Vehicle.…[paving] the way for Global Social Demonstrations (GSD). Developed several new methods: Indicative Battle Planning, Trend Analysis, and data Gapping and Clustering.*

“The pencil drawing that appears on the front cover of [Brother Joe**], the book about JWM (Joseph W. Mathews) by his brother James, was drawn that summer by artist Rudy Wendelein, who was the originator of Smokey the Bear and was a staff member of the US Forestry Service and recruited to the summer program by Bill Newkirk. I was at the table with Rudy (we were with the Newkirks in the DC House at the time) during one of JWM’s talks at the plenary and saw him draw it. We took him up to JWM at the end and gave him the original” ( Jim Troxel, July 2014).

The Canonical Hours were developed in the early church. By the third century the form and arrangement had been established, and few major changes have been made since. The [night] hours of Vespers, Matins, and Lauds came first. To these night watches were added the three day hours of Terce, Sext, and None. Later in the life of the monasteries two more hours were added: Prime in the morning and Compline at night. This gave eight hour offices, each one a three-hour period of the twenty-four hour day. (“Offices of the Hours,” talk by John Bengel, Summer ’71, Chicago) * 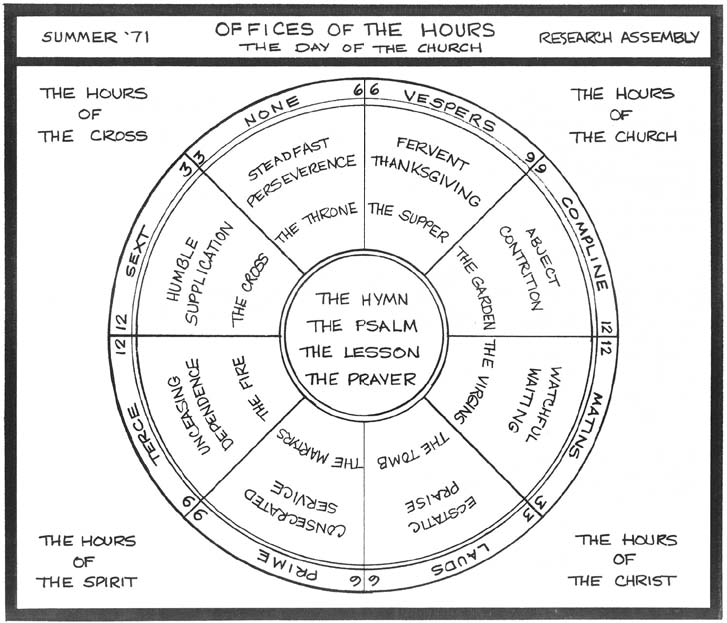 Council VI of the Order Ecumenical

“New Individual in the New Society Course (NINS), was piloted with the North Shore Cadre on weekends and was first taught in Caracas, Venezuela. The theological underpinning of NINS, later called Leadership Effectiveness and New Strategies (LENS)* was Sanctification (going on to perfection). Experimented with the Psalms conversations This balanced the underpinnings of RS-1, which was justification” (Brian Stanfield, 1993).

“NINS was called the Convoy Course for a time because of the large number of teachers needed to teach it. It had 3 Divisions: Female, Male & Youth and was really three courses in one. The name of the course was changed to LENS (Living Effectively in the New Society). This title was invented by JWM on a train between Glasgow and London in December 1972 or January 1973” (George West, 1992).

“‘Impact East’ was a trip of 5th City Preschool teachers to Ivy League schools to lecture on Early Childhood Education. The teachers met with people struggling with the concept that became Sesame Street” (Ann Ensinger, 1992).

The move to the LENS Process (V-C-P-T-I) [vision, contradictions, proposals, tactics, implementaries] grew out of the summer research “Room E Dynamic” discussion and the work with the North Shore Cadre to produce an awakening tool for the business community. The contradiction approach was not new for JWM—that is the above early model—the vision was the new dimension and the concept of proposal we borrowed from a French writer* in a book about the USA. The contradictions approach I believe JWM took from Chairman Mao. I think the seeds of the vision element may have been in the study of The Wretched of the Earth, where he [Frantz Fanon] emphasized the spirit creation preceding the physical manifestation or the physical being a manifestation of the spiritual reality. We were doing visioning but did not have it structured into the planning process (George West, 1992). 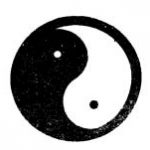 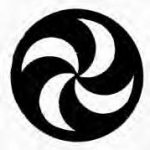 In 1971, there were 51 Religious Houses, 15 of which were outside North America.

A new Religious House was started in Toronto (Bill Grow, 1993).

The first New Woman’s Forum was held in Hong Kong. 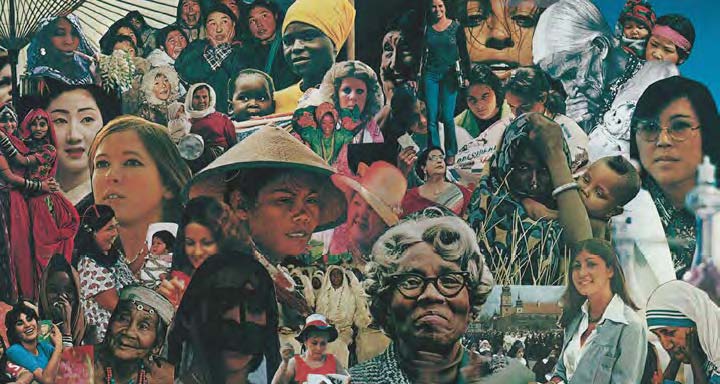 “LaVerne Phillips made the [Women of the World] montage. A couple of others helped but it was her creation” (Priscilla Wilson, August 23, 2015).

A Far East International Training Institute (ITI) was held in Manila, The Philippines. It was the last of the six-week ITIs and drew participants from Japan to Australia. Joe Pierce was the Dean (Basil Sharp, 1992).

The first 5th City Rehabilitation Program was funded. One hundred and two housing units in eight buildings were targeted for rehabilitation (the ecumenical institute, 1970).