Piloted the curriculum that would become the Academy

Pulled together the research from the year and created the New Religious Mode (NRM).*

This was when we got up early—3 or 4 a.m.—in order to keep our low profile in the community just following the April Riots ( Jim Troxel, 1992). 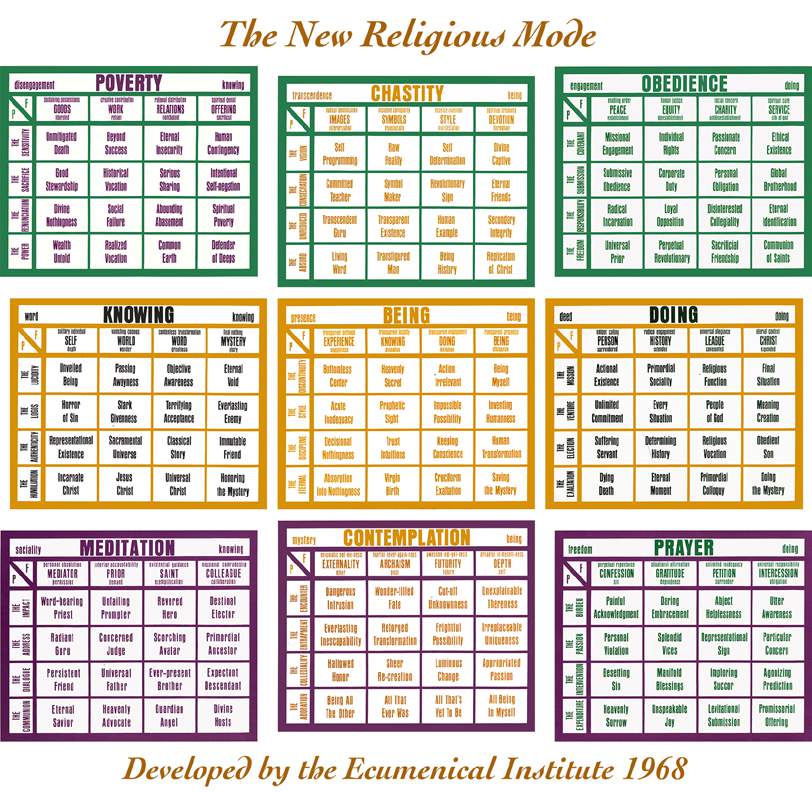 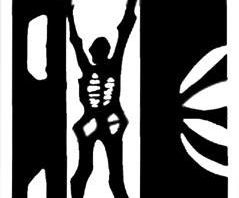 The Iron Man statue was unveiled in 5th City plaza and The Iron Man Covenant was written. The statue was created to hold the power and strength required of people who had decided to make a commitment to building their local community on behalf of the world. The [10’] statue still stands at the entrance to the 5th City shopping plaza (5th City, Rebirth of the Human City, 1973).

”[Jean Loomis created the Iron Man statue] in the summer of 1968. The Iron Man originally ‘lived’ in the empty lot next to 321 Homan (now long gone), which was the home of the 5th City Business Guild, where Jean’s 5th City mural was painted on the back of the building in 1968. Many years later he moved to the plaza in front of the Shopping Center, where he was regularly knocked down by vehicles. Each time he was resurrected by the Board of Managers” (Marshall Jones, OE Community, March 6, 2015).

Council III of the Order Ecumenical

Wrote Document II, The Construct of the Movement

and created the Movement Designs document.

Developed the Odyssey and corporately studied St. John of the Cross. (Dolores Morrill, “The History of the Global Movement’s Assemble-ing,” New York Region, 1979)

The Academy was established in 1968 as an experiment in education that took seriously the relationship of depth study and the corporate life. It was a two month program attended by people from all over the world and at one time was accredited by more than 50 colleges, universities and seminaries (The Academy, 1975).*

The Academy curriculum was developed in three segments: social methods, intellectual methods, and motivational methods. Plus the CS [cultural studies] and the RS [religious studies] developed before The Academy began. Most of the content came from experiments in 5th City (social methods) and work done at Austin (intellectual methods) and stuff coming out of the summer research (motivational-spirit methods). There always seemed to be more content than we could get our minds around (George West, letter, March 4, 1992, Lima, Peru). 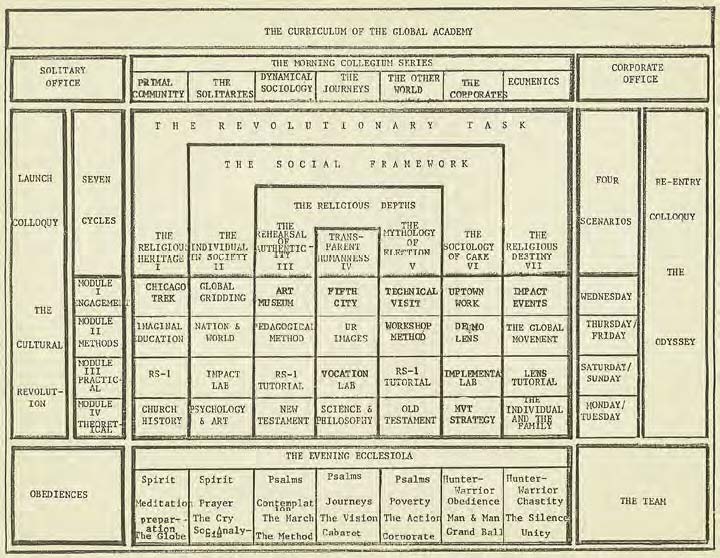 The Corporate Religious House Model was built during August 1968.* The first Global Academy was taught, with 20 people, in the Fall of 1968. David McCleskey was Dean and the faculty members were Joe Pierce, Bill Alerding, and Kaye Hayes (Doris Hahn, 2013).

A teaching team toured Europe and taught in England, Germany, Holland, and Yugoslavia.

Keith Chapman (Packard) came to the preschool in 1968 during its second wave of development into the 5th City Preschooling Institute. Lela Jahn (Campbell, Bayer) was the director. We were developing a spiraled wholistic imaginal curriculum from birth (actually six weeks) through five years. Some of the others on the staff were Ruth Carter, Wanda Lee, Anna Marie Hampton (all from 5th City) and Nancy Grow, Mimi Shinn, Joyce Townley, Raymond Spencer, Gary Forbes, Ken Ellison, Joy Warner, and Sandy Conant (Powell, Strachen) (K. Elise Packard, email, May 2017).

The Imaginal Education course was taught for the first time in the fall of 1968.**

I remember teaching the first weekend course in Imaginal Education with David McCleskey, Rick Loudermilk, and Kay Lush. We designed the course at the request of Joe Mathews’ sister who was teaching in a school in New York. We presented the course to her colleagues sometime in 1968 or ’69. Then the teacher’s guild continued teaching the course around the country for the next few years with the support of the more seasoned trainers to start with (Marilyn Oyler, ICA Dialogue, April 24, 2011).

The Religious Houses and the Odyssey

One of the most interesting phenomena I remember about the NRM [The New Religious Mode] and the Religious Houses was that in December [1968] when the Priors all came back, each House had experimented with a construct that evolved [into] the Odyssey format we later all came to know and love. The key was that each [house] had done it without consulting with one another. Synchronicity par excellence. That was confirmation that we had struck a deep chord into the Spirit Life ( Jim Troxel, 1992).

Launched the Urban Academy, an intensive six-week program for training Urban leaders from ghettos across the country. George West was Dean. Most of the participants were from 5th City and the South Side of Chicago.

The Spring Academy joined forces; one Academy was held on the West Side campus.

“Kuala Lumpur (KL) was first house overseas and was followed by Sydney, Australia in ’69” (Stanfield, 1993).

“The development of The Odyssey, a spirit journey retreat, began and the first Odyssey was held in each house. Then Chicago Base took these constructs and created The Odyssey.” (Doris Hahn 2013)

Corporate study of Kenneth Boulding’s The Image and Walter Nigg’s Warriors of God.

“Experimentation with the Solitary Office was done daily by each member of the community. Individuals stood present: to the final mystery in life [Contemplation], to colleagues [Meditation], to the civilizing process as a person responsible for the past, present and future [Prayer]” (Customary).

PMC replaced by the Parish Leadership Colloquy (PLC) a course for parish ministers and church leadership.

The United States was gridded to the Metro level.

The OE created a 16-year time line as symbol of long-term commitment to 5th City and the Globe. 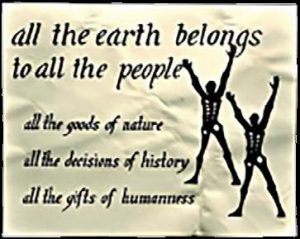 First recorded cadre outside of North America was started: Where? When?