In early 1963, this group began looking for a suitable place in the City of Chicago to live and experiment with a local community development project. They found that the Church of the Brethren was moving out of their seminary on the west all their major needs, and after negotiating to buy the property, it became the new home of The Ecumenical Institute at 3444 W. Congress Parkway in the summer of 1963

Trip to Africa. JWM went to Africa in the spring of 1963 with Bishop James Mathews. As the independence movements in Africa were peaking and succeeding, Patrice Lumumba was still on everyone’s lips. JWM was captivated by how they did this. The Lumumba Room* (a conference room symbolizing order polity and community consensus) was named as a result of a trip to Africa. 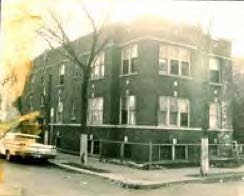 EI staff had been looking for a site in Chicago where we could be part of the Civil Rights movement. Busses and McCleskeys were sent to Africa in summer of 1963 to research the methods used by African independence movements in hopes some of these could be applied to working with African Americans in Chicago. While Busses and McCleskeys were in Africa, the Bethany Seminary property was found, secured, and everyone and everything was moved from the Ecumenical Institute house on Asbury in Evanston to Bethany Seminary on the West Side. The seven families affiliated with the Ecumenical Institute bought the old Bethany Seminary at [3444 Congress Parkway] in the heart of the West Side. They brought their belongings, their children, and their desire to set up an urban center for improving human communities

Joe acquired the Congolese cross in the Congo on his trip with Bishop Jim. It was a form of money used in ancient African times.…I think for JWM it represented antiquity and symbolized that the cross pre-dated Christianity

The residential community on the West Side of Chicago established [itself ] as The Order: Ecumenical (O:E) and used the image of the Congolese Cross as the symbol of the order. Frank Hilliard nailed the Congolese cross on the wall of the dining room at 3444 Congress Parkway as part of ritualizing this beginning. The Order Ecumenical was an experiment in 20th century religious community. This was a time of experiments of many kinds of community across the United States and Europe

* Patrice Lumumba was an independence movement leader and the first democratically elected Prime Minister of the Republic of the Congo.

The 5th City Human Development Project [“Community Reformulation Project” at the time] began in a Chicago West Side neighborhood surrounding the Ecumenical Institute (The Institute of Cultural Affairs, 1979).

The name 5th City grew out of the sense of people that their “city” was going to be entirely different from the four socio-geographic “cities” that make up the modern urban complex: downtown, inner city, neighborhoods, suburbs. This new community was going to be based not on geography, but on the sheer decision of its citizens. It would be a “5th City,” built to bring hope and renewal to cities everywhere (5th City, Rebirth of the Human City, 1973).

The five Geneva Offices were written as a part of the RS-I courses held at Lake Geneva and were designed to represent the five sections of the RS-I format.*

The Geneva Offices were in fact created at the [Young Men’s/Young Women’s Christian Associations] conference at George Williams College in Wisconsin. In fact, George Williams College is located at/on Lake Geneva, which is how [the offices] got their name. Most people think they were named for something to do with Geneva, Switzerland, site of the World Council of churches, but that’s not true

From 1963 to 1966, Carl Caskey and I (Vance Engelman), were Co-Directors of the Wesley Foundation at Oklahoma State University. During that time Gene Marshall with EI came to the campus to visit his parents who were on our Board. He told us what was going on in Chicago and the rest is history. We met in 1964 and over the next year and a half we sent roughly 150 students and faculty to Chicago for courses. Some you will know: Jim Troxel, Rob Work, Judy Montgomery, Leah Jahn, and a couple others who wound up in Chicago OE, and about ten others who wound up in Regional Houses

* Later versions of the five Geneva Offices, marked LC-1, LC-2, etc. were prepared for
use in the Local Church Experiment.