Over 800 order members and associates met for six weeks in Chicago to determine the “corporate future, formation, direction and goals for the next 16 years [to the year 2000].” Sixty people came from Kenya and over 100 people came from the Subcontinent. Many of these participants had never traveled far from their own villages. Orientation sessions had been held in Nairobi and Delhi. There were special menus and special language groups to help with translation into Hindi, Spanish, Swahili, and French.

The global community of the Order Ecumenical comprised 700 people from 108 locations on eight continents, representing 37 nationalities. 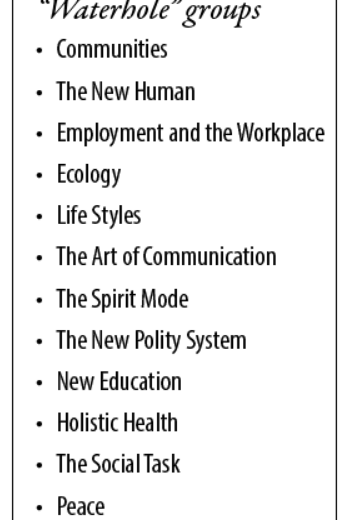 • Twelve working groups, called “Waterholes,” each with a particular focus, addressed the question “What is going on today in our lives and on the planet?”

• The Global Brain, a film and book by Peter Russell provided imagery for the Council.

• Thirteen students made the 6th Grade Rite of Passage trip to mark their transition from childhood to youth. The trip took them through 17 states, including the southeastern USA.

• Ninth graders who had been living in the US, Kenya, Peru, Egypt, Belgium, Tonga and Australia had a reunion.

Kenya. Over 1,000 villages participating in replication. The “DOOP [Do Our Own Project] Model” enabled villagers to use their own resources and leadership for village development (The Institute of Cultural Affairs, 1983–84).