Austin. At the CFLC research and development was done on the practice of discipline and how to create comprehensive operating structures for an intentional community. Continuing theology courses for clergy and RS-1 for lay church members, were taught across Texas.

The community began to turn its attention to the role of the local congregation in society, and a weekend residential seminar, known as Religious
Studies 1 (RS1) was developed. The seminar was taught to local congregations and student groups (History).

On the 30th anniversary of the creation of RS-I, the Bergdalls sent holiday greetings from Kenya with an artform that captured RS-I’s life message. 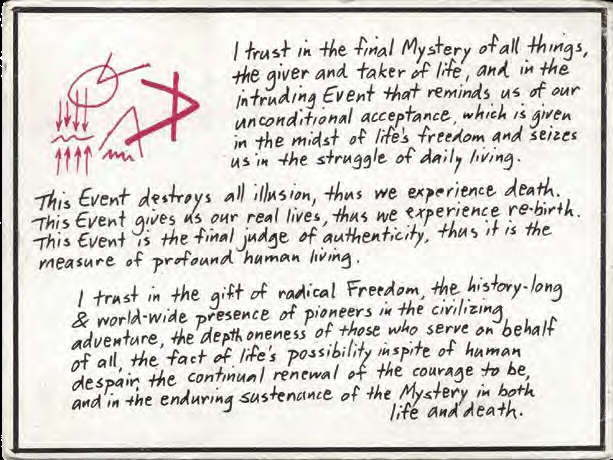 The reverse side of Terry’s and Pam’s card is below.

The RS-I seminar was the foundation of the Religious Studies Curriculum. Five symbols anchored the course and visually represented a basic understanding of  “The Way Life Is” (TWLI) that has influenced much of the work of EI and ICA over the past fifty-plus years.*

The Big Squeeze. The picture we have called the “Big Squeeze” is a symbolic description of the life dynamic every human being encounters. Consciously or unconsciously, every human being is driven by care, care about the sustenance of life, care about knowledge of life and care about living life. And yet every human being is also limited by the finiteness of all of life. Sustenance is never satisfied, knowledge is cut off, deeds are not completed or are miscarried, and longing for perfection is never realized. Human beings realize they are not their own creator. This enigmatic power that makes a comedy of human caring, that casts us into solitude, that calls us to more caring, and that gives the guilty over to torment. At the same time we are driven to life, to love, to doing, and to knowing. The struggle between self-assertion and duty continues throughout life. This power is always beyond us and yet human beings are forced to name it and stand in the midst of this life dynamic.

The Intrusion Event. The Human BEing is, out of necessity, an illusion maker. We are forced to interpret life, creating an imperfect but necessary picture of reality that allows us to function. The intrusion is an occasion in which reality destroys the picture of our self and universe that we have created, and reveals the actual situation to which we must respond. The intrusion is not an idea, but an event which takes place in the midst of everyday life in which the illusions about life are shattered and one’s whole life perspective is called into question. When one’s being is threatened one seeks to defend the shattered life by destroying the intrusion, but the bursting of the illusion is permanent and each individual either is left to deny the fact of the happening or to create a new life out of the new situation. 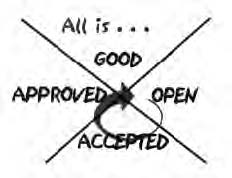 The Word. The word of possibility is a confessional statement about a transforming posture one can take in relationship to the event and situations of life. This word is pronounced on reality and declares in relationship to the present that all is good, without exception; it declares that my life with all its problems and gifts is received by the universe; that all of the past is totally approves; and that the future is entirely open. The impact of this confession destroys all excuses for escape from real situations and releases the possibility of creative engagement in what was previously seen as an impossible situation.

The Tension. This symbol reflects the two poles of obedience and freedom. Human beings are constantly caught in the decision to be obedient to obligation or to be free from a set cultural
patterns, structures or principles. The human being has the freedom to decide between obedience or freedom. The guide to which a human being turns is responsibility to self and neighbor.
It is responsibility which holds the tension between blind obedience and blatant irresponsibility. In this time in history when the lines between right or wrong vary from one situation to the next, we must observe the situation, judge it, weigh-up the alternatives, decide the response and act on the decision. Responsibility to all of life provides the context in which the decision is made. Once made, the decision is judged by history itself.

The Wedge Blade—“living on the point” between the no longer and the not yet. The image of the wedge blade depicts how the future is built in the midst of the present as the old forms
of care (that have brought the human being to this present moment) pass out of being. History has always been created by “selves” who had a model, worked together corporately to get it into history and thus altered the direction of history. The activity of this people is always creating the future in the middle of nowhere or out between the “no longer” and the “not yet,” and inviting others to follow. As “Those Who Care,” change the direction of history, it call for their lives to be laid down on behalf of that very future they are bringing into being. The people who have been called the “Those Who Care” decide who they are in total solitude with nobody’s approval, and discover others who have made the same decision. 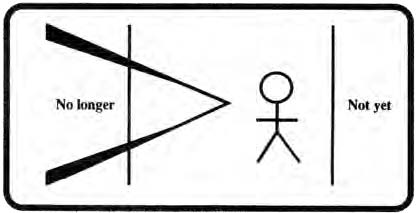 Those who live on behalf of the future have no certainty that what they do is the adequate or necessary act but they perform their deeds in the midst of ambiguity and insecurity.

The one who dares to care for the future receives none of society’s rewards but experiences unexplainable joy and peace that passes any rational understanding, and finally there’s no end to the job of changing the face of the globe; it calls for total commitment and requires one’s whole life. 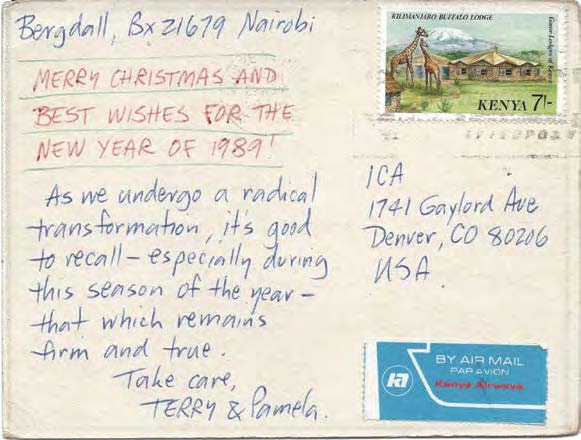 * This description of the RS-I seminar was transcribed from The Roundtable,
ICA:Chicago, 1981–82. A chart of the Religious Studies Curriculum is on the next page.