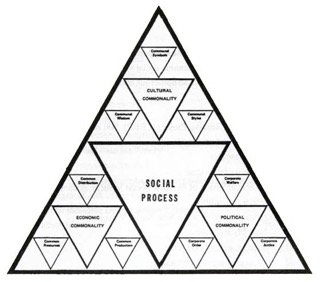 This graphic catalogue of society’s dynamics takes the form of an equilateral triangle, subdivided into smaller triangles similar to a Sierpinski fractal. This visual image provides a memorable way of grasping, not only the dynamics themselves, but also their relationships. Each of the three major corners of the triangle is broken into three which are then subdivided into three and so on down to the 7th level. The resulting model constitutes a complete listing of all the factors that constitute a society – whether it be a social unit as small as a family or as large as a nation at any time in history. The Institute used this model in analyzing local communities and in formulating strategies for their comprehensive and sustainable development.

Massive upheavals rack our world. The whole globe is in revolution heretofore unknown . . .  It is a violent disturbance in the deeps of consciousness itself. . . [We are]  hurled   into a great struggle to invent, as if from the beginning, what it means to be human. This beyond all else defines our time

“Nothing remains untouched. All dimensions of our personal and social existence are affected and every individual, every people and every institution ee involved. The worldwide economic tensions and political strife which have marked our century are but symptoms of this depth eruption. Long honored social constructs are called into question, family patterns are upset, educational systems rendered inadequate, religious institutions cast into shattering self doubt.”

The Institute’s social analysis in 1968 was sweeping, but a bit lacking in detail.  By the early 1970’s the work of  The Ecumenical Institute / Institute of Cultural Affairs had grown to the point that a refreshed, deeper and more detailed analysis was being required to focus the efforts of the several thousand volunteer staff and colleagues working locally  around the world.  The Institute, like every social movement that intends modification of society, needed a picture of the society they intended to create, and some understanding of what would be required of them to create it.

The Movement and the Social Avalanche, talk by Joseph Mathews, Summer Research Assembly, 1973

Toward a Practical Vision of the New Social Vehicle, an exploration of the relationship between the Social Process triangles and the emergence of a new social form

The research project, designed to be self-sustaining, was initiated in 1971.  Colleagues and volunteer staff engaged in reading and summarizing hundreds of books related to the dynamics of society. Weekends were devoted to problem solving units digesting the research and designing the Social Process triangles, an artful and amazingly complex and useful tool for mapping the complexity of societies and social groups

Social Demonstration and the Pressure Points, a talk by Jim Wiegel in 1974, about places in the social process where change could happen

Epps ppt: Four slides by John Epps that illustrate the dynamic relationships within the social process and visually diagram a way to depict their imbalances.  (John recently sent around an animated version, a powerpoint, which I suggest we use)

To do this, “The Ecumenical Institute of Chicago [is designing] designed a three year grassroots social research project aimed at the problem of providing the “local man” with a practical comprehensive vision of the new social dynamics emerging in our day which will enable him to understand the trends of the time, motivate him to engage himself in shaping those trends and to provide him with some basic tools to effect that engagement.”  (from a proposal to the Rockefeller Foundation)

Thus begins one of the earliest declarations of the group of people who founded The Ecumenical Institute of Chicago and The Institute of Cultural Affairs. They were resolved to assume “pioneering and representational responsibility” Today, after half a century, that responsibility takes the form of “Working with others to build a just and equitable society in harmony with Planet Earth”.