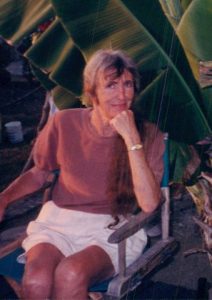 What a lovely tribute to the life and service of George.  I, like Martha, remember the power of George’s Spirit Conversations.  Many of us learned the process well enough to lead meaningful reflections and touch on “the profound” with topics like “tears,“ or “fire”, or “birth,” but George was able to “bleed profound meaning” out of something as inanimate as “a pentel pencil”.  The latter was a tool of the mission he carried in his shirt pocket always, loaded with the .7 size lead — just perfect for building 4 X 4 charts.  Another memory that holds for me his willingness to experiment to create “something out of nothing” was his hydroponic garden on his porch in Litibu, laden with juicy tomatoes, hanging upside down.  And finally, I am embarrassed to admit like others, I can’t remember the year George and Donnamarie were married and I should, because Joe and I were asked to stand in as “his parents” and give the family blessing, as it were.  This was comical to me, because although Joe was 5 years older than George, I was 10 years younger.  From then on I felt I had permission to say, “Now son, I need to share this with you…..” to which his eyes would twinkle and he would quietly chuckle.  Thanks again for making this community event happen.

When we were interning in Chicago, we moved into the Wests apt. at 314 S. Trumbull.  (I think that was the address….near the Preschool). It was pretty rough, but a move up from the bunk beds and a desk in the dorm side of the building (above Room E side).   They had knocked a hole in between studs with some remodeling in process, giving Johnny a little space of his own.   We had a big double sized loft bed with desks underneath and a sofa with broken springs that practically sank to the floor.  But with their Picasso print of the Blue Man, I thought we were in Hippy Heaven.   I think they had left for the Urban Academy.

Later John was in Cano Negro with George for the consult.  We remember George as a very quiet man, full of wisdom and care for local people.  His book on community building was a real gift to us all.

I have two stories to tell about George. One is about our conversations together and the other is about transportation.

No one spoke more with George than I did. The fact that he enjoyed pipes was revealed to me as I often visited while smoking mine. He would comment on the pipe and I would inform him a bit of the history of that particular one and the tobacco I smoked.

Our conversations were on one of two topics: either theology or politics. George was always reading a book. Usually it was a book of one of the sources we had through RS-I like Bpnhoeffer or Tillich or one of Joseph Mathew’s talks from his two volume set. I would listen to his insights and then comment on them myself. We always enjoyed the discussions.

The second area of conversation was politics. He was a fan of Rachel Maddow, and I watched Morning Joe. On the long run-up to the 2000 election that led to Donald Trump’s election, right up until the result was in I was sure that Hillary Clinton would win and he kept worrying that Trump would. Like so many Liberals I thought that Hillary would come through it. But she didn’t. I had to apologize to George for being wrong and we would talk and talk about it.

The second story I wanted to share about George was related to transportation. George was a horseman. In the early days of building his house he owned a horse and kept it in the village. Finally he had to give it up as it was costing him to much!

His alternative mode of transportation was a four wheeler that Mike Stringer gave to him many years ago. Right up to the year of his death George would find time to use the four wheeler to go and get things from the village of Higuera Blanca.

Finally there was the car, a 1985 Oldsmobile made in 1988. I believe Donnamarie’s father gave it to them. George babied that car every time he drove it. It had such good shocks that the bumpy road had no affect on it. We called it the “Float-mobile” . As George aged he used it less and less until finally he sold it to the mechanic in Higuera. It is still sitting there waiting for repair.

Sacred Poetry: “The Prologue from The Saviors of God,” Judith Hamje

Here is a link to the two songs Lela sang during the memorial:

Below is a link to the instrumental music at the end of George’s memorial from the Anders Widmark Trio, “Lov, Ära Och Pris:” https://open.spotify.com/track/1gu3jSUEeEf0BXmdsk23HF?si=48cacadb41244f8e

The Memorial for George West was a privilege. I only had one face to face encounter with him. It was Summer 1984 Research Assembly where we paired up in a Neuro Linguistic Program (NLP) workshop. The leader asked us to alternatively look at each others eyes and ask the other partner a question. When I asked George a question, he waited a minute then slowly looked up, down, left, right, then straight into my eyes and took another breath without answering. I suppose he eventually did answer, but I don’t recall. Comprehensive, incusive, intentional, reflective, and caring  modestĺy describe his noble presence among us. That was a pivotal summer from which I took the practice George demonstrated in that mini workshop. Whole and perfect indeed!!   Walk in Peace.

Hello Beloved Ones. A few words of gratitude about George West: https://drive.google.com/file/d/1EE_rdJQSROxu55TiGdQBeuwvbKYvXITk/view?usp=sharing.  Grace and Peace,

George was – I think – my first ‘First Teacher’ in Religious Studies I.  I was probably 23 or 24 and feeling pretty young.  George said something like, “Fix yourself in your mind that you’re 35.”  I still do!

Here are additional links of George and Donnamarie West’s books and an news article about them: