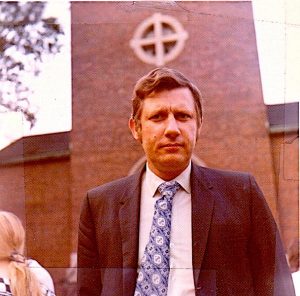 Frank was a real spirit giant in our community. In awe and amazement, I join in rejoicing the completion of a wondrous life that touched so many, including my own. Heart felt regards to Aimee and family. Grace and Peace,
~~  Joyce Sloan

I first met Frank at Perkins (SMU).  He shared great stories of Joe’s teaching to all of us. He really missed Joe.  Joe had just departed for Faith and Life.  Frank was a good basketball player, too; as well as an organizer.  He put together the seminary’s intramural team.  He also put me onto a job while I was a student there.  He later was part of some of the courses the New Orleans cadre were putting on, and when Wanda and I showed up on the West Side he was helpful in our getting oriented.  He kept a lot of things rolling on the West Side that kept the mission going.  Always a great story teller with his East Texas drawl, hard to forget.

I was in Frank’s Ecclesiola at Centrum.  One night we all went to Greek town to a special restaurant called Diana’s. We persuaded the owner to dance and he finished with resounding Opa’s as he flung his glass crashing against the wall. We were mesmerized.  Our members were raving about the experience. On the next day Frank added his insight:  Always appreciate a man’s special talent but never fool yourself thinking that a talent represents a grounded life.  Our restaurant owner could be someone living authentically or maybe not. Thanks to Frank for the sharing and his sacrifice. A beautiful life.

When the McGuire family moved to Fifth City in January, 1972, I was assigned to Emerging Generation. One particular task I remember was taking your little daughter to the Cook County Hospital emergency room with a throat infection. I don’t know which of us was more overwhelmed. I hope I was kind and comforting, but am not at all sure of it. Frank was very kind and comforting on a development call in California in 1977, not long after we left the Symbolic Order. The colleague with him was Ray Spencer, I think. Fred was teaching, and I wasn’t, so I went to lunch with the two men. Frank asked me, in the spirit of research on behalf of the Movement, to share why our family left. I replied that our children, two problematic adolescents and two younger sons, needed our attention. My deep denial kept Fred’s alcoholism out of my conscious mind. I added with quivering voice that I felt our family had become more of a drain than an asset to the Order. Frank nodded and said, “I’ve had that feeling at times.” Profound absolution washed over me. A great gift from a gracious soul. I’m sure many experienced him as a means of grace throughout his life. The party on the far side banks of Jordan must be livelier by the day. Blessings on your continued journey, Aimee, .

Frank and Aimee are inseparable, in our recollection – Aimee the soft-spoken spokesperson, and Frank the brooder and bold strategist.  We needed a building in Sudtonggan’s training center, especially after the staff house burned down.  Frank passed the word down from Manila that money was never the problem.  With Qing On of Hong Kong, we convinced a Chinese lumberman in Cebu City to advance all the materials we needed to construct a “log house”.  We got the building up in a jiffy. Later, Frank planned to shed a few pounds off his Texas-size girth, and did so in three months.  I remembered this when I heard of Frank’s passing; responded with a weight watch of my own in his memory!

Frank was in many ways a pioneer like Joe Mathews.

Frank and Aimee were the very first people –  along with Joe  Mathews and Joe Slicker-  who set foot with the Ecumenical Institute- here in Australia. We remember Frank with love, and give thanks for his gifts willingly given to us.  He was a presence. Richards Sims spoke well…   Frank maintained his love of the Church, and kept it shining,  all through the years. Good bye, rest well, Frank.

Bill and I are sending warm thoughts to you both as you celebrate the completed life of Frank.  So many memories! Preschool in Fifth City and working on the curriculum; ITI in Manchester, living on the porch of the London House when you three were there.  We send our love and gratitude to your whole family and those who worked closely with you in Chicago and around the world. Grace and peace,

Frank and Aimee were Area Priors in the Philippines. They were the best area priors I had in the Order. Frank had a gift of being supportive and concerned about our struggles in Sudtonggan. I always walked away from our meetings with a sense of “if things fall apart ( as they regularly did), Frank would be there to help get it back together”. I was deeply appreciative of his willingness to hold my hand in our families first time overseas. He will do well in this new assignment. Grace and Peace,
~~  Dick Alton

Several years ago I was able to go to New Zealand and share with our colleagues there a Maori Marai. The opening ritual was a song and story to communicate your connection to each other, to the land, the sea and the mountain.  For me it was especially powerful since I have spent so much of my life with colleagues from Australia and New Zealand and the opportunity to sing with them and to them. I am sorry I have not spoken to the earlier deaths. I feel unable to articulate how much each person has meant to me in my life. Each will be missed and each represents songs and stories that echo through my life and our lives.

As for Frank, my first memory of Frank was when I was 10 and he and Aimee were with the children on the west side for breakfast or dinner. Aimee was joy and light and Frank was large and serious, and a little frightening to me.  In 1972, Frank taught with me on the last RSI i remember teaching. I was 18 and in Washington DC I think. He was the first teacher and I was probably third. I do not remember anything about the course except spending  the evening with Frank in a bar talking about the life I was choosing.  With love and respect, Larry

Though I was only a ‘fellow traveller’ of the Institute, I still remember Frank Hilliard as a major voice and a major leader of the movement. I believe he was one of the teachers of the RS I for which I did the groundwork in England in the late ’60s. I am grateful for his stalwart voice.

Well, I remember my last, long conversation with Frank in Brussels in ’83. He was a warm colleague to me during my two years in Chicago in ’68-’70. I will always have affection and respect for him. Gratefully,