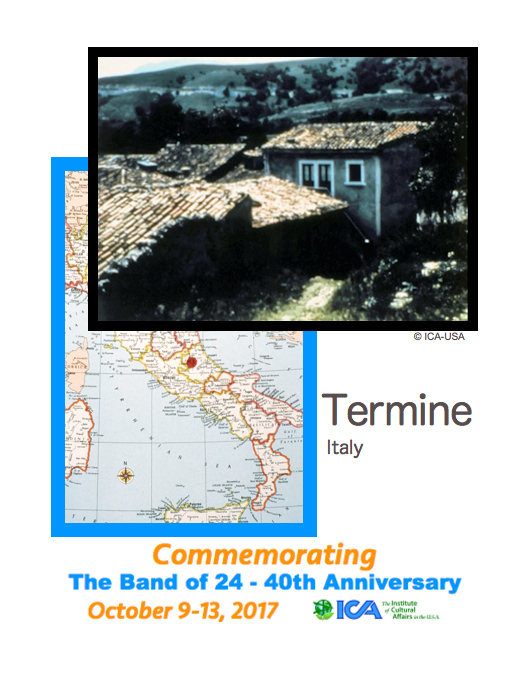 The Termine Human Development Consult was the initial step in a comprehensive development project. The project site is located in southern Italy, in a mountainous agricultural region. The project deals with both social and economic problems in a comprehensive development programme. It was begun through a c~op erative effort of village leadership in conjunction with the Institute of Cultural Affairs. The intention is to develop a self-sufficient economic base and social structure which will encourage a larger population and enable expansion of community services.

The project is a pilot programme, the methods of which can be duplicated throughout Italy and across the world. It was not until 1861 that the nation of Italy as we know it today became a political entity, but several times in the his tory of the Western World, Italy has created the major impetus for new thought and style. The Roman Empire, the Roman Catho lic Church and the Renaissance are a few of the epoch-making events which originated in the peninsula.

Since its Unifica tion, Italy has striven with the question of new nationhood in the midst of an ancient heritage. The conversion from an agra rian to an industrial economy has created many political diffi culties, yet in the midst of the tensions the government is answering the call of local people for closer participation in government by transforming its base of services from the national to the regional level and by forming neighbourhood and village councils in every community.

An emerging new relation ship between the Christian Democrats and the Communists suggests a decisio~ to deal comprehensively with the nation’s issues. The past thirty years has seen a period of great economic and social development. While Northern Italy has become an area reknowned for its intense industrialisation, the eight regions of the South have for various reasons failed to follow the same path. The disparity between North and South has been recognised by the government, and a special ministry for development of the South has been set up. Since the war a spectacular highway to the Abruzzo has been built, so constructing a communicator infrastructure which connects southern villages with the market of Rome. Extensive funds are available for southern industrial development.

The European Economic Community also place a hii;h priority on Southern Italy in an attempt to bring the region to an economic level commensurate with that enjoyed by the rest of the nation and by Europe as a whole. The Abruzzo region is situated south of the centre of the Italia peninsula. It is a rocky, mountainous land including the peaks of the Appennine Range, the Gran Sasso and the Maiella. ‘l’his region has been marked by a tumultuous history. Lowlanders seek ing refuge from heat and malaria first settled and farmed the Abruzzo.

Subsequently, for 150 years’ early inhabitants defied the might of the growing Roman-Empire. Never defeated, they at last accepted a treaty providing full Roman citizenship. The Abruzzo was conquered by Barbarossa II in 1140. Later it was overrun by the Longobards and Normans; and througrhout the Six teenth to Eighteenth centuries it was in the hands of the Span ish. The presence of German, British and American forces in the Second World War began a new influx of outside customs. The traditional livelihood of the Abruzzo has been farming.

With today’s ease of global travel, tourism is rising to a prominen-t position in the regional economy. Visitors attracted by the mountains, lakes and thermal springs delight in local gastronomic specialties, unique traditions, cool weather and ideal skiing conditions. Many of the 1.3 million inhabitants of the region are leaving their villages to go to the larger towns – Pescara, Chieta, Teramo and L’Aquila. Depopulation has reached as high as 50% in some villages; others have become largely holiday resorts for residents of urban centres such as Rome. Reliance is increasingly placed on industry and the tourist trade rather than agriculture.

While these new economic trends have contributed significantly to the well-being of the region as a wholc, the social existence of numerous villages is threatened. Recognising this issue, regional authorities have iniliated a cultural project, the “Projjetto Montano Amiternina” for the Amiterno region which includes Termine. However, villagers naivete about the opportunities available for government subsidies and continuous conflict between the Fascist, Communist and Christian Dcmocratic political parties has made the situation more difficult. The Abruzzo is today initiating approaches to dcvelopmcnt which are highly relevant to the thousands of rural area across the world which struggle with appropriate mechanisms of economic and social development.

The village of Termine is situated in the mountainous northwest on the corner of the Abruzzo region in Southern Italy in the Italian markade; Appennine range. The name “Termine” which-means “the end” or “the terminus”, is reminiscent of the village’s embattled history. Mountain fortresses still stand as reminders of the confrontation to nations here with the invading Longobards. The chief occupation of those times was agriculture and the same is true today, particularly sheep, cattle and forage crops. The farmers who have land in the Cascina valley move out with their families and the Italian spend the summer months living in second farmhouses there and then move back to homes in the village for the winter, taking their herds with them.

Winters are usually severe with an average of about three feet of snow, but the summer months are d the quite warm. The people of the village largely raise their own vegetables and keep chickens, pigeons, turkeys and donkeys. Cows they are often kept in ground-floor barns below the upper-storey homes Thc of their owners in the village. No designated head man exists, but there are a number of strong informal leaders. The primary social unit in the village is the extended family, to which great importance is attached. Many families keep rooms and houses empty to anticipate the visits of relatives and close friends who have gone elsewhere for employment.

The piazza in the centre of town serves as a community gathering-place, where people chat and pass the time of day. An Italian dialect unique to this area the sets the people apart from their neighbours, as does difficult access to the village. Villagers appreciate the mountain air and spectacular scenery, but hold unanimously that the village is ugly. It is said that Jesus, in his travels through the world, passed by this village at night and missed it in the dark.

The mountain village of Termine is one of 12 fractions (frazioni) in the township (“comune”) of Cagnano Amiterna, which together with 15 others makes up the county (“comunita”) of Amiternina in the Abruzzo region. The village’s territory consists of three mountain valleys, Montecona, or the edge of cultural which the village proper is located, Calabritto and Cascina (also called Palazano). The village has a population of 450 people. It is built on the side of a mountain slope, with three paved roads running horizontally through the village connected with ran along unpaved, rocky pathways, with cement stairs in a few places, from top to bottom. Most of the houses have running water inside and 75% are connected to a sewage system. Commerce in the village consists of three general stores which sell dry goods, meat, pasta, tinned goods, beverages and ice cream.

There is little employment to be found inTermine and most residents work outside in San Giovanni (a nearby village which has a cement factory), L’Aquila and Rome. Most of the agricultural land is — given over to forage crops. Cheese is made on a small scale from sheep’s milk and sold locally. There is one telephone in Termine but none in the Cascina. The schooling is limited to one elementary school attended by 13 children from the community. Higher education is obtained at nearby San Cosimo and L’Aquila. There is a university at L’Aquila and some students from Termine commute on a daily or weekly basis. Most of the population are aged under twenty or over fifty, the rest having left to find work. The nearest large towns are L’Aquila, 45 minutes away, and Rome, 2 1/2 hours away by car.