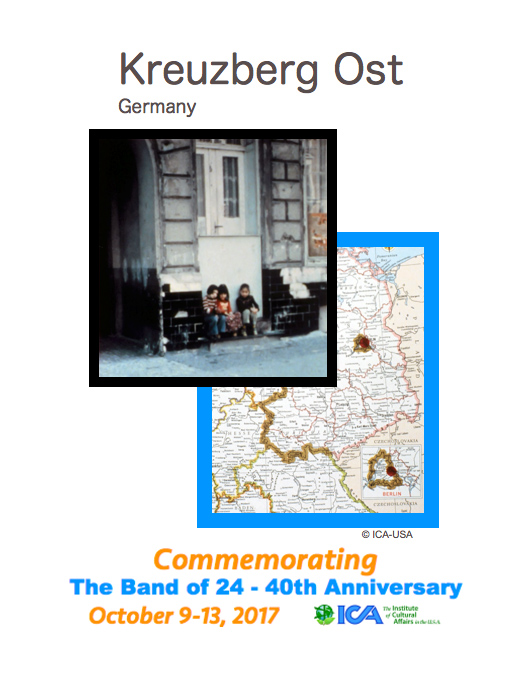 The Kreuzberg 0st Human Development Consultation is the initial step of a comprehensive community development demonstration being undertaken with the people of Kreuzberg 0st, an urban community located in the district of Kreuzberg, seven kilometres from the centre of West Berlin, Germany’s most populous city. Kreuzberg 0st lies at Schlesisches Tor, the last stop of an U-bahn elevated line. It is a bustling community of colourful shops, wide streets, five-£torey apartment houses and a four-block industrial strip of small factories and warehouses.

The Spree River, still a highway of barges, separates the northern boundary of Kreuzberg 0st from East Berlin. The project involves both the social and economic development of the community. It was begun with the help of a number of concerned citizens of Berlin with the knowledge and encouragement of various government officials. The current intentions of the people of Kreuzberg 0st, as ex pressed during the consult, are to create continuous education, to enable community cohesion in the midst of cultural divers ity, to redevelop community life through the inclusive en gagement of the people and to emphasize local economics.

This project is seen as a demonstration of methods which can be used by any urban community in the nation and which therefore could be duplicated elsewhere. The Federal Republic of Germany is entering a new period in its nistory. The economic progress of the nation has been a modern day miracle. Its gross national product is the third highest in one world’ its inflation rate one of the lowest. The decade of the 1960’s saw cold-war tensions and student unrest threaten a new-found political stability and even brought basic human values into question. As the 1970’s unfold, many resurgent themes are gathering momentum in the nation’s life: distribution of the nation’s wealth to all its people, easing of political tensions with the East through a realistic “Ost Politik”, support for third world develop ment and concern for the role of local man and local commun ity as participants in the decision-making process.

Those most concerned with refocusing national vitality and purpose are increasingly aware of the importance of the struggle for responsible change at the local level and the power of local man’s voice. Significant recovery of vital community life in German cities would have an almost immediate effect upon the cities of the globe, each of which experiences, in its unique way, the common crises of urban life. ~or this reason, the Kreuzberg 0st Human Development Project would have a significance that reaches far beyond the boundaries of Berlin.

Berlin is the youngest of the great European cities. It is located in the heart of the North German Plain where transEuropean land and water routes intersect. Her landscape is marked by sandy soil, pine trees and glacial lakes. The city that began as two small trading posts on opposite sides of the Spree River over 700 years ago became the repository for German cultural literary, scientific and technolo~ical excellence. With the industrial revolution that occurred at the end of the nineteenth century a stream of workers from Germany and Eastern Europe were called into Berlin. Before World War II, Berlin, though a large industrial centre, was also renowned for her large green spaces, lively atmosphere and unique style.

After the war, the city was divided by a wall that now runs around the world. Completely sur rounded by the German Democratic Republic, West Berlin is now a separate ertity tied to but not a part of the Federal Repub lic of Germany. It is a city rich with museums, trade fairs, concerts and art, but the post-war vision to recover Berlin’s former significance has not been realized. Both people and capital continue to leave the city. The proportion of elders is high. The Berlin wit and humour which have grown up with the city still remain, but cannot hide the signs of despair over the loss of her greatness. The challenge before Berlin is to forge a new role within her given limitations, a role that will again release the energy and imagination of all her people.

The challenge of the Seventies is once again calling forth Berlin’s self-reliance and resolve to survive. Kreuzberg, the densely populated southeastern section of the inner city belt is a product of Germany’s industrial explosion of the last century. When Berlin’s city districts were formed in 1920, it received its name “The Mountain of the Cross.” Overcrowding resulted in an architectural pattern of attached apartment buildings with factories in the centre. Throughout its history, Kreuzberg’s factories, its five storey grey stucco apartments, backyard life and gaslit streets have produced a type of urban art which celebrates the world of the worker with unromartic realism.

Today Kreuzberg is known in Germany as an area where the major chal~enges cf urban life are focused. Housing built in the last cent ury and greatly damaged by the bombings of World War II has been massively rebuilt, but in areas such as eastern Kreuz ~ berg, not yet scheduled for reconstruction, housing and re creation space have been pushed to capacity. An influx of workers around 1,°70 recruited from the rural areas of Medi terranean coun~ries provided the extra labour force neces- I sary for the expanding German economy. lhe “guest workers” have become a permanent part of the city’s life and make up a little over one-third of the population. Another one-third of the population is over 60 years of age. Only two-fifths of the population are economically engaged.

The administrative structures of Berlin are now aware that city-wide policy can be implemented effectively only when local community consensus is taken into account. A number of recent attempts by local groups to exercise their respon sibility for the community indicates a readiness to part- icipate in creating their community’s future. The project area is a sixteen-block area of closely packed five-storey walk-up apartments and factories with a pop ulation of approximately 16,200. It is bounded on the north by Berlin’s shipping artery, the Spree River, on the east by the stark concrete of the Berlin wall, on the south by the walled-in remains of the Gorlitzer railroad yards and on the north-west by the elevated U-Bahn line.

One third of the population is over sixty years of age. An additional third are labourers from Turkey, together with w Yugoslavians, Italians, Greeks, Spanish, and Palestinians. Except for five new structures, the 400 buildings in the ;, community date from the nineteenth century. Only a few of s them have been renovated and brought up to present standards. Eighty-six percent of the homes are heated with coal. There rs are 138 medium-sized manufacturing plants and warehouses h grouped in a four-block strip along the south bank of the Spree River.

Most of the company owners and many of the employees live outside the community. Seventy percent of those working in the community are labourers. The unemployment rate is six percent, twice that of Berlin. There are 169 retail businesses including small tobacco shops, restaurant-pubs, bakeries, grocers and second-hand stores. The U-Bahn and two bus lines make the community readily accessible. Three kindergartens, three elementary schools, one vocational school, a youth centre, a well-baby clinic and two churches are located in the community. The nearest major hospital is twenty five minutes away by public transportation.