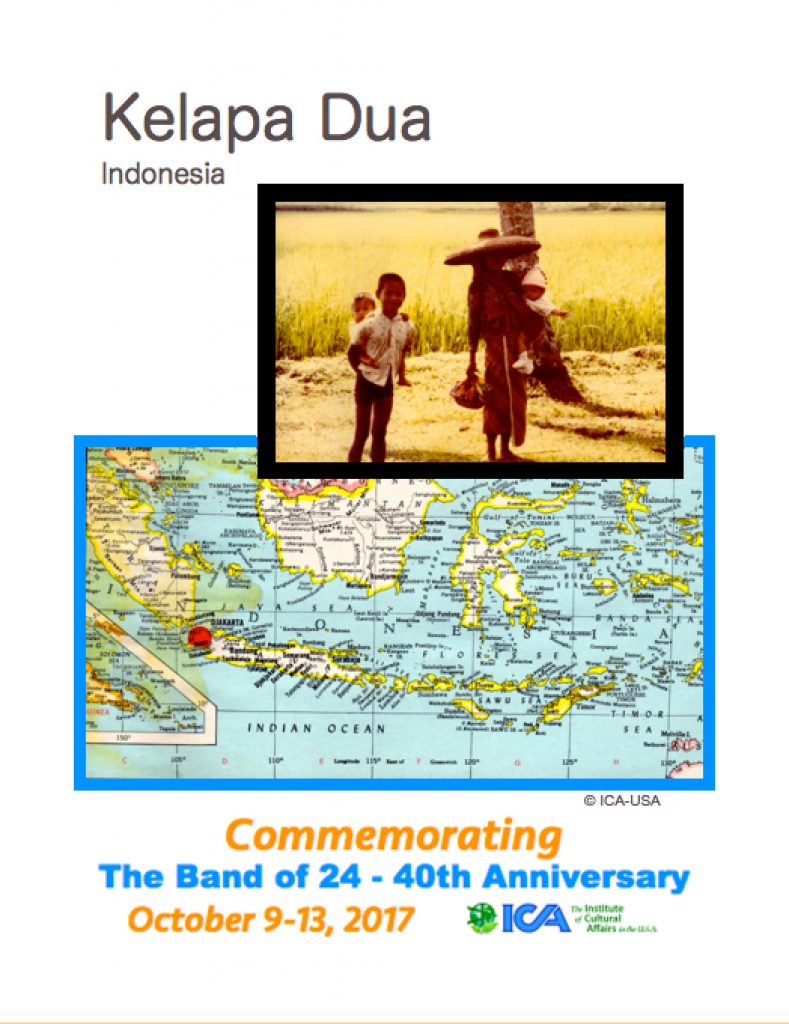 Two-thirds of Indonesia’s 132 million people live on Java, making it the world’s third most densely populated region. Founded 449 years ago by a conquering Bantanese sultan, Jakarta has from its origin brought together first the Sudanese, Bantanese and Javanese peoples, then peoples from a great variety of nations and cultures. Today an estimated 90 percent of the city’s six million inhabitants come from other regions and give reality to the nation’s slogan of “unity in diversity”. For approximately 350 years the city bore the Dutch name of Batavia.

After Independence in 1945 it was officially renamed “Jakarta” which reclaims an early Bantanese name meaning “Great Victory”, to symbolize the birth of the new nation. As political center and as center of Indonesia’s vast efforts in economic development, the city’s magnetism has had to be discouraged by a governmental decision to close off unnecessary migration. Freedom Square in the city’s center, sleek skyscrapers, modern arteries and new industrial and residential complexes contrast with teeming slums and districts lined with hawkers and stand as signs of the nation’s hope in the midst of the overwhelming weight of development. City leaders have recently created a system of museums and restored historic buildings to capture and display Indonesia’s cultural heritage.

Today Jakarta continues its traditional role in commerce and trading even as a new industrialized base begins to take form. Urban planners project a Jakarta sweeping far across the plain, drawing neighboring cities such as Tangerang into its orbit, and making it absolutely necessary that a Human Development Project begin to deal with impending social dislocation in the surrounding rural society.

The district of Tangerang lies 30 kilometers west of Jakarta on a highway connecting the two trading, exchange and entry points of Jakarta and Banten district’s population of one million is a cultural mixture unique in the nation. In addition to Indonesian, the national language, diverse cultural groups speak Sudanese, Javanese and Malay. Large numbers of Chinese settled here at a time when much of the land was held by Chinese landlords. The name Tangerang itself is Chinese in origin, from ‘tang’ meaning the Tang Dynasty, and ‘ren’ meaning man, – literally ‘Men of Tang’.

The Kelapa Dua Human Development Consultation was the initiating step in a comprehensive demonstration project by the people of Kelapa Dua, a remote rural village located in the Tangerang District of the Province of West Java, Indonesia. Kelapa Dua is 36 kilometers southwest of the teeming capital city of Jakarta and lies in the midst of sprawling, terraced rice lands.

Kelapa Dua Human Deveiopment Project includes the three interrelated kampungs of Asam, Nurdin and Dahung which, along with five other kampungs, understand themselves to be the Kelapa Dua area.project is a comprehensive effort that involves both the social and economic development of the village. It was begun through a cooperative effort by villagers and concerned citizens of Tangerang and Jakarta with the knowledge and encouragement of government officials. Their intention is to expand the economic base of the community to move beyond a subsistence economy, to develop functional forms of education, to create structures of community services, and to release the creative vitality of the community and its individual residents.

This project is seen as a demonstration of methods which can be used by any rural community in Indonesia and which, therefore, could be duplicated elsewhere. In 1969, the Republic of Indonesia, the fifth most populous nation in the world, initiated the first Five -Year Plan to stabilize its economy. In spite of enormous barriers and occasional setbacks, the country’s natural wealth and resources began to be channeled and made productive. Agriculture expanded, hydroelectric and steam power production made substantial increases and new oil sources were tapped.

With the second Five-Year Plan of 1974, Indonesia has turned her attention to broadening the development effort, and so has demanded of herself a new self reliance as she focuses on the development of local leadership and the rural areas. With 80 percent of her 132 million people living outside major cities, responsible leaders stress the importance of village development for the nation’s future. Only comprehensive social and economic development of Indonesia’s 55,000 villages can provide the enormous local energy and resolve needed to continue Indonesia’s determined growth.

Recognizing the dangers inherent in over-crowded cities, the government now discourages new movement into Jakarta and seeks to reverse the tide of rural to urban migration. The: development of rural channels of participation and local incentive can be seen as a key to balanced economic development. At the beginning of the fourth decade of her nationhood, Indonesia is facing this challenge forthrightly. The nation’s intensified efforts at socio-economic growth and rural development are being followed closely by other ASEAN nations and the world at large, eager to witness Indonesia’s slogan “unity in diversity” effectively at work.

In this milieu, the Kelapa Dua Human Development Project promises to be of significance for Indonesia zs a pilot effort in comprehensive rural village development. Jakarta’ capital city of Indonesia, stands on the Sudanese plain of West Java and through its central location along a 5440 kilometer wide archipelago links Java to the four larger islands of Sumatra on the west, alimantan (Borneo) on the north and Sulewesi (Celebes) and Irian Barat (West New Guinea) on the east.

The local people were known as hard workers in the fields, and the landlords prospered. Tangerang was also well known for its bamboo and straw handicrafts and as one of the largest sources of rice for the Province of West Java. From 1942, when Tangerang became a district, a significant period of expansion began. Today the district experiences a 2.3 percent annual population growth. This constantly expanding labor force is the key to the district’s development, for it is attracting industry on an ever increasing scale.

A new international airport is now being built 25 kilometers from Tangerang and large – scale irrigation projects promise a future of intense development and accelerating change. As Tangerang becomes absorbed into the greater metropolitan area of Jakarta, the struggle to emerge from a rural past will become more acute and the complexity of providing adequate services to the network of villages in the surrounding countryside will be intensified.

The project area is a complex of three village units called “kampungs”, Asam, Nurdin and Dahung, bounded on the south by the Islamic Village and facing the rice paddies on the north, west and east. An unpaved road links the approximately 1500 inhabitants to the major town of Tangerang six kilometers to the north. Overlapping leadership systems relate the three kampungs in both traditional and modern structures for social care.

The Islamic Village School, one-half kilometer distant, draws about ten percent of the school-age children, few of whom remain beyond the fourth grade. Illiteracy is estimated at 80 percent overall, and 95 percent among those over 25 years of age.

One youth attends a technical high school in Tangerang. Dahung, located adjacent to the main road, sends a higher percentage of its children to the school than do Asam and Nurdin. Marriage occurs for women usually during the ages from twelve to fifteen and most men are married before age twenty. Except for a local midwife, medical care requires a six-kilometer trip to Tangerang over roads sometimes impassable in the rainy season.

Malnutrition is a major problem. Bamboo and thatched homes, owned by villagers, house large extended families. Occasional glass windows, tile roofs or gasoline lanterns vary the normal pattern of the packed-earth floors, windowless walls, and oil lamps. One stream is used both for washing and human waste. Most households have transistor radios. Approximately 50 percent of the families own and farm small plots, grrowing mainly rice and tapioca.

The people of Kelapa Dua see that the future of their village requires a conscious development of communtiy style in terms of community facilities and identiy. They are anxious to establish recreational areas for children and youth, especially a sports field. A key to community identity was seen to be leadership develoopment, people want better inter-village communication, skills in entrepreneurship and liaison with the local government. Kelapa Dua residents desire ways to celebrate their identity through telling traditional and modern stories, using symbols to mark the continuity and singing local songs. Overall there is a longing in Kelapa Dua for a new cooperative spirit.