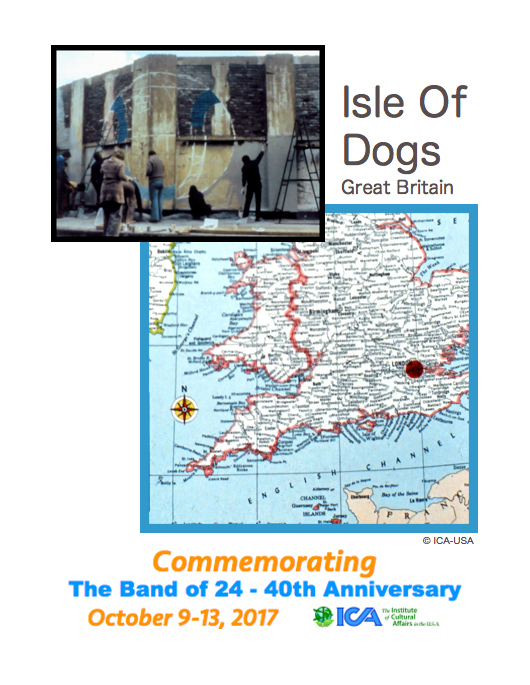 The Isle of Dogs Human Development Consultation is the initial step of a comprehensive community development demonstration. This will be carried out by the residents of the area which lies within a horseshoe curve of the River Thames in London’s East End.

The project involves both the social and economic development of the community. It was conceived in collabor ation with government officials and local citizens who helped to provide the substance of the project design during the consultation and are now prepared to begin to implement it. Their intention is to accelerate commercial development on the local level, to provide the practical training required for the residents’ significant engagement in community life and to develop the networks of relations which exist both within the Island and Greater London to ensure the expanded socio-economic well-being of the community.

This demonstration project is further seen as a pilot programme, the methods of which can be reduplicated in urban situations across Britain and continental Europe. Britain is entering a new period in her history. Over the past 400 years the British people have taken their gifts across the earth in the form of organization, trade, law and a world language. The City of London for centuries was considered by those at home and abroad as the capital of the globe.

During World War II the British people’s heroic struggle for survival illustrated both the need for and the possibility of co-opera tion among all levels of society. Such co-operation has more recently been evident in the agreement among unions, employers and the government to work together on a domestic level during a time of economic crisis. Likewise on a national level this theme is echoed in Britain’s decision to enter the European Economic Community.

Simultaneously there has developed a grow ing demand for local participation in decision-making which is seen in the form of neighbourhood action groups, nationalist parties and local patriotism. The shift in the nation’s posi tion as a world power has opened the search for a new role. Those who are serious about the future know that the key to this is the courage of local people to risk creating vital community life in the context of socio-economic change, as a sign of hope to the world. Here, the Isle of Dogs Human Development Project might be of great value as a pilot effort on behalf of all Britain’s urban communities.

The Isle of Dogs lies immediately to the West of the Greenwich meridian in the heart of London’s Docklands-on the River Thames. Its strange and memorable name reflects the fact that both as a geographical and a social entity, it has always commanded recognition. The Island came into existence in 1342 during the reign of Edward II when the area was drained and embanked. Its tranquil, rural atmosphere was transformed into an industrial site with the opening of the West India Docks in 1802.

The Island subsequently became the heartbeat of British trade which threw a network of communication lines around the earth. From that point on every ship entering or leaving London sailed from or around the Isle of Dogs. Since then the people have sensed themselves as intimately related to the whole world. For many years the dockworking community of the Island was renowned for its solidarity and mutual support.

In recent years with the impending closure of the docks, the people of the Island are not only losing a key source of sus tenance but are also finding themselves cut off from those wider contacts – yet they have a strong sense of identity directed towards the future. While they know the old Dock lands are gone forever they are eager to relate themselves to the world in a new way.

Some Islanders are ready to lead the way in rebuilding their community as a sign of what is possi ble in an urban, western, developed nation for similar communities throughout the world. The area delineated as the project site is a peninsula of approximately one and one half square miles on the North bank of the River Thames.

Bounded on three sides by the river–Blackwall Reach to the East, Greenwich Reach to the South and Limehouse Reach to the West–and by the West India Dock railway to the North, the 13,000 inhabitants live in the ~ London Borough of Tower Hamlets in Millwall Ward and the Blackwall area of Poplar South Ward. Elected members of Parliament, the Greater London Council, and the Borough Council have traditionally belonged to the Labour Party.

Community organizations include old age pensioners’ clubs, residents’ associations, youth clubs, a rowing club, library, public baths, bowling club, barge clubs, dart clubs in the Island’s 20 pubs, football and other sports teams. Five primary schools and three listed play groups are located on the Island. George Green’s School, recently opened at the south of the Island on Manchester Road, is the first purpose-built neighbourhood school and community centre in the Inner London Education Authority area. Prior to the opening of the school in January, 1976, secondary children had to leave the Island for their education. Until the new building is in full use most pupils over 12 years of age will continue to commute.

The Isle of Dogs, whose population’s average age is younger than that of Greater London, is the only area in Inner London with an increasing population. Since the war, more Greater London Council (GLC) housing has been built here than in the other boroughs. Eighty-six and one half per cent of the homes on the Island are leased from the Borough of Tower Hamlets Or the Greater London Council. Island health facilities include two doctors’ surgeries, a child welfare clinic and a dental surgery.

The nearest hospital is located about two miles off the Island. Island residents are served by London Transport buses 277 and 277A. One of every three households in the Island has a car. Diversified industry on the Island includes Associated Lead Works, a Tate and Lyle sugar refinery, McDougall’s Flour Mill, large timber merchants and several road haulage, stockholding and ship repair companies.