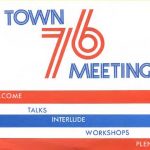 Each state had its own approach to the national campaign.  Starting in 1974, ICA offices began ‘golding’ the counties as they held Town Meetings and shaded the county ‘gold’ on a map until all the counties were completed. The following are stories and documentation of that effort from 1974-77.